‘My Madonna’ is the second track, after ‘Dungaree Day’, to be released from Paul Molloy’s debut album The Fifth Dandelion which is released on 21st August through Spring Heeled Records. Watch the superb animated video here with Shindig! Magazine.

A masterpiece in video form featuring cut-out animations of the musician himself, landing in a colourful, Gilliam-esque otherworld. Molloy appears as a rocket-riding space explorer and valiant knight in the short film, with he and his partner, Fiona Skelly, painstakingly hand-cutting each illustration, before animation duties were taken over by esteemed
filmmaker Dom Foster.

Molloy had this to say about the strong female presence of My Madonna “It was written about my girlfriend Fiona when we first met. It’s how I envision her. And then when my mother died a couple of years go when I was in the thick of recording the album I would practice the piano parts in the house and it seemed to transform into this ode her also. It became a tribute to the women I love most. The video was done as a collaboration between Fiona and Dom Foster. We’d been watching a lot of Python and I wanted it to be akin to a surreal fairytale. So Fiona done all the cuts outs Gilliam style and coloured in all in, I give her a little hand we drew a storyboard up and then Dom magnificently animated it.” 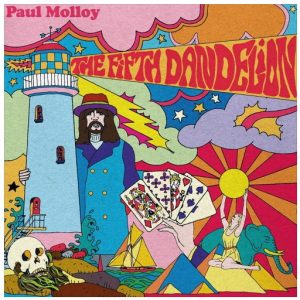 The Fifth Dandelion by Paul Molloy is released via Spring Heeled Records on 21st August and you can pre-order HERE.