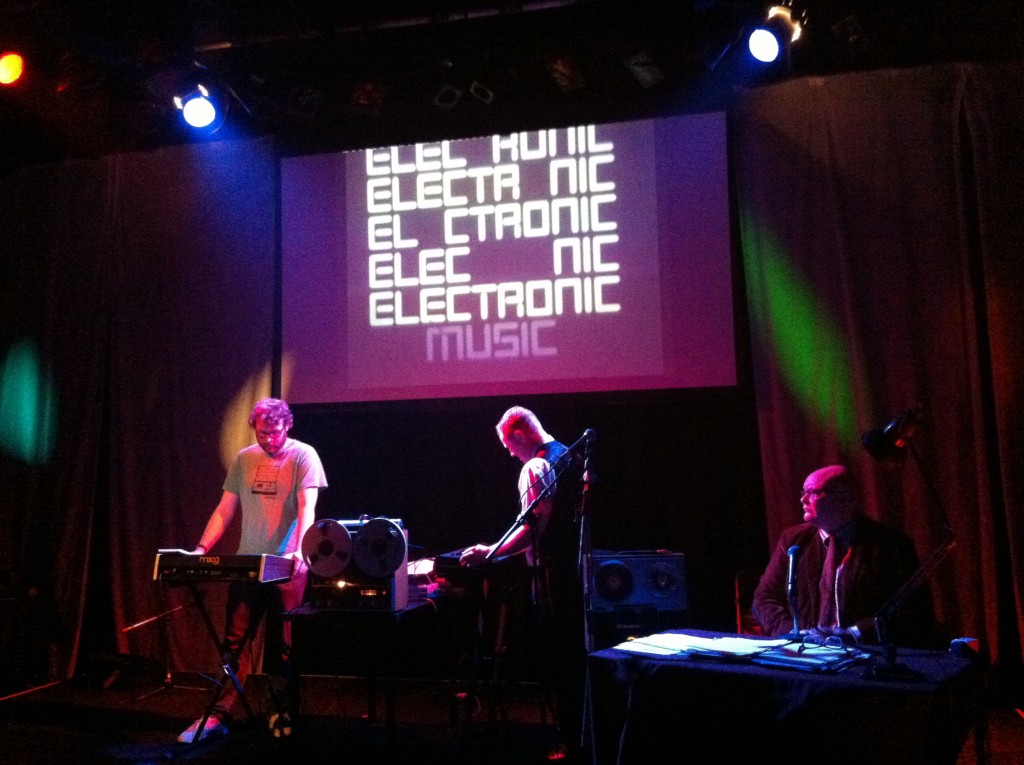 Departing South London on a rainy Saturday evening we travelled to Reading for the launch of Buried Treasure’s new compilation, The Delaware Road, at The South Street Arts Centre. Bumping into Jonny Trunk at the parking metre was fortunate as we’d run out of change and, after a battle with an unruly £1 coin which refused to stay inside the machine, we entered the packed room. Promised a night of radiophonics, tape loops, vintage synths and spoken word we braced ourselves for an eight band line up held together by a narrative from Dolly Dolly. Seated at a table under angle poise lamp to one side of the stage for the entirety of the gig and looking for all the world like a broadcast announcer of old he was a revelation, holding the audience captive between acts as the night and story unfolded. Written by Dolly aka David Yates and label manager Alan Gubby, the tale of The Delaware Road is loosely based on two members (“the man” and “the woman”) of a sound studio reminiscent of The Radiophonic Workshop. The clues are all there, the BBC being referred to as “the corporation”, and the tale includes shades of The Stone Tape Theory, the occult, the swinging ’60s, orgies and demonic powers released through sound recorded on copper wire.

The evening was an ambitious production including visuals, smoke and lighting to compliment the soundscapes for the three hour duration. Proceeding chronologically from the late ’60s through to the ’80s, each act soundtracked the period in time perfectly, kicking off with Robin The Fog’s Howlround project of tape loops strung around mic stands, mirroring the early tape experiments of the Workshop. The Twelve Hour Foundation duo tickled us with synth-heavy ditties redolent of the many radio and TV themes produced for the BBC and repopularised by the likes of The Advisory Circle today. Ian Helliwell’s set up consisted of a small pub table crammed with small boxes (I’m sure I saw an alarm clock too) which throbbed and pulsed with all manner of devilish tones as he bent sine waves out of shape, accompanied by his own amazing animations. As the narrative moved into The Swinging ’60s it was the perfect moment for The Dandelion Set’s first public performance, oil wheels revolving and Op-art shirts waving. Despite a technical hitch with the Moog during the first track, a setback which had the crowd cheering once fixed, they didn’t let it phase them and ran through several tracks from their forthcoming album, ‘A Thousand Strands’.

Alan Gubby’s own band, the unpronounceable Revbjelde, produced a stunning set with bow scraped cymbal, metal percussion and lute, unleashing a Wickerman-esque medieval suite for the releasing of spirits. Loose Capacitor paid thrilling homage to the golden age of TV, climaxing with the joyous ‘Theme From Robin’s Nest’ which had part of the crowd clapping along whilst Tim Hill’s sax and FX pedal set up changed musical tack again. Each performer bought a new dimension to the story as images of vintage synths, solarised landscapes, ’70s Britain, Morris dances and electronic components were projected overhead. A compilation of ’70s celebrities flashed by to the glam beat of ‘The Shag’ by Trouble & Strife – Basil Brush, David Essex, Keith Chegwin – ending in Gary Glitter and Jimmy Saville to the collective gasp of the audience. As the night and narrative wound to a close we entered the ’80s of “suits”, buttons replacing dials and microchips on the ends of fingers with Robin Lee’s synths perfectly capturing the cheesy “business funk” of many library albums of the era. Finishing with a second set from Revbjelde, this time accompanied by Tim Hill, the band closed with a storming rendition of ‘Tidworth Drum’ from the new compilation to huge applause and a heartfelt thanks from Alan, surprised at such a turnout for such an esoteric event. It was presented with such love and care that it felt like a family occasion where the label had found a common ground amongst its roster – so far a mix of reissues and original material – that pointed the way forward. All in all a genuinely unique night with many unknown names now firmly lodged in the subconscious, seek out the compilation and keep an eye on the Buried Treasure label, still not even up to their tenth release.

One thought on “The Buried Treasure label presents “The Delaware Road””