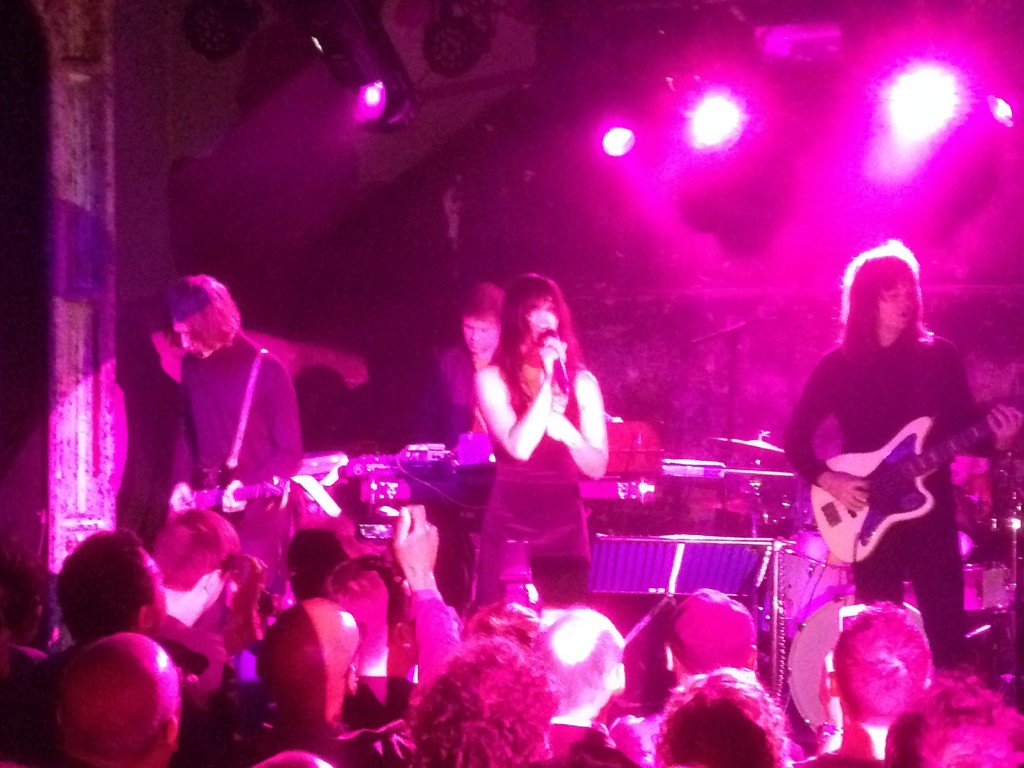 It’s a full house tonight in this fashionably dingy basement venue, the crowd awaiting a show from the unique collaboration that is Bat For Lashes driving force, Natasha Khan, record label owner/producer Dan Carey and psych-musical polymaths Toy.  With only one live appearance to date as surprise guests at the Green Man Festival, it’s intriguing to hear what is essentially a carefully curated set of covers (albeit given an illuminating transfiguration in the studio environs) given the live treatment.

The band start with album opener ‘Ghoroobaa Ghashangan’ and the sense of dark forboding that underpins the recorded material is immediately present  – “Our love has passed away, too disentangled to exist…”. The slinkiness of the bass-centric groove works to provide a solid rhythmic platform for Khan to tune into the occasion.  The stage is bathed in a crepuscular blue, red and purple light and gives the impression that this is more of a gothic twilight ceremony than just a gig going on here.

‘Ha Howa Ha Howa’ takes the music further down the rabbit hole into a musical chasm of the band’s making.  A key factor in this being Dan Carey’s use of the Swarmathon, a strange wooden encased electronic instrument that Trent Reznor (of Nine Inch Nails fame) once described as “a spider web of cables, soldering and madness”.  It seems to be the backbone for most of their tunes with a trademark “dual notes interweaving” sound.  This alongside the band’s capability to supply a motorik–like drive, provides Khan with the perfect backdrop to let loose with her voice, often restrained within her more famous material.  Khan has described the process of recording vocals for the SEXWITCH project as “like a voodoo exorcism” and it certainly seems that some kind of possession of her body and soul has taken place.  In contrast, between songs, Khan is all smiles laughing to herself and telling the audience “I need to calm down!”

‘Helelyos’ continues to entrance both singer and crowd; the stage lights  fusing with the performance and Khan’s evoking of the incantational aspects of the lyrics, transforming Zia’s original (as found on Finders Keepers’ Persian psych-funk compilation Pomegranates) into a journey through the heart of darkness, ambiguous and all the more unsettling for it. A cover of Skip Spence’s ‘War In Peace’ followed by an airing of the pre-album collaboration that started it all ‘Aroos Khanom’ (The Bride) and the vocals continue to become impassioned and tumultuous  – “Now my heart is beating in my chest, no one to confide in!” – the Swarmathon swells and the band keep their heads whilst the sonics continue to whirl through the night.

‘Kassidat El Hakka’ (roughly translated from the Moroccan source as ‘the Poem Of The Truth’) is central to the SEXWITCH sound and it’s no surprise that they finish the set with it. It’s a pulsing, relentless spine-chiller that leads Khan to shake and scream before appearing to be overpowered by the sledgehammer nature of the cacophony being created behind her. Overall, it’s an incredibly interesting diversion for all involved  – here’s hoping that there’s more to come.

You can stream the album here