In the first of regular posts from TSPTR, we step inside the musical presence of CHARLES MANSON

Charles Manson channelled all the paranoia, fear and hatred hovering around LA in 1969 into a terrible murder spree that altered the course of American counterculture. Manson did not however exist in a vacuum, he was a well-known part of the LA scene at the time. 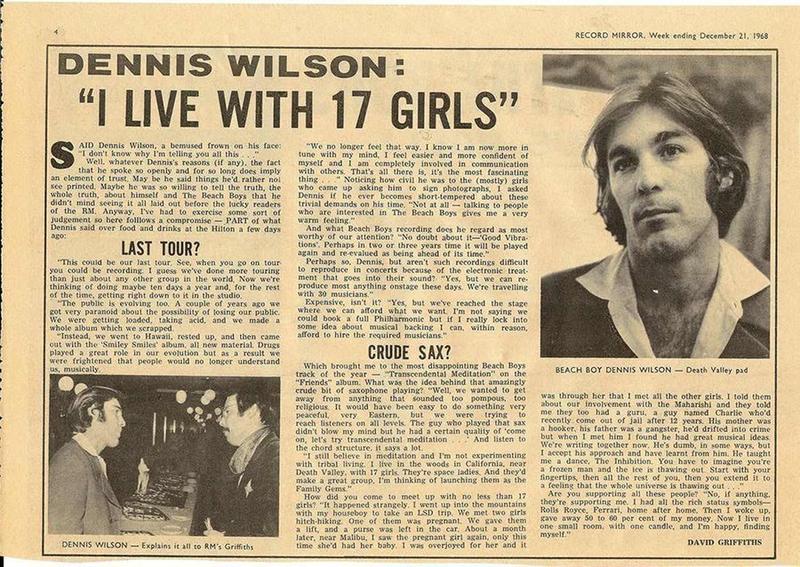 While it’s been widely reported how Manson came to meet Dennis Wilson of The Beach Boys, how it ended is not so well known. History records that it was Manson’s proclivity for “taking” that ruined his potential creative alliance with Dennis. After “ripping off” most of Wilson’s possessions and trashing his house (he’d moved out months before), the “family” also totalled his $21,000 Mercedes (half a million dollars in today’s money) and managed to wreck both Brian and Dennis’ Ferrari 275GTB’s in separate crashes while driving around downtown LA. Manson finally capped his lack of gratitude to the ever-generous Wilson by threatening him. One day in 1968 Manson walked up to Wilson holding a single bullet. When Wilson asked him what it was, Manson replied, “It’s a bullet. Every time you look at it, I want you to think how nice it is your kids are still safe.”

According to musician Van Dyke Parks, who witnessed the event, Denny gave Manson the “beating of his life” right there and then in front of a bunch of “hip people”. Manson slithered away, embarrassed and enraged, followed by his “family”.

There is a persistent rumour that Brian Wilson himself engineered an entire album of Manson’s music, the tapes of which still allegedly reside in the Brother vaults. The rumour has been consistently dispelled by Beach Boys’ engineer Stephen Desper but upheld by Wilson family friend and collaborator Gregg Jakobson – as usual with anything Manson related, confusion and misinformation abound. Desper maintains it was Nick Grillo who arranged for Charlie to record some material but none of the brothers were present at the sessions. Desper recounted the moment when a particularly unkept and unwashed Manson placed a gun on the mixing board, he recalls he was wholly unimpressed. Jakobson meanwhile, who was fairly enamoured with Manson, told a different gun related story in a ’92 Esquire interview, in which he describes an incident where Charlie pulled his piece and put it against Jakobson’s head, saying “What would you do if I pulled the trigger?” Jakobson replied “Well I guess I’d die.” Apparently, Manson was amused with the comeback and put the gun back in his belt. An incontrovertibly true event however, occurred when The Beach Boys performed a Charles Manson song on primetime US national television… there they were on The Mike Douglas Show in the spring of 1969, swaying dreamily onstage to Charlie’s composition ‘Never Learn Not To Love’, renamed from the original ‘Cease to Exist’.

Another Manson penned jam titled ‘Sick City’, written about the ongoing degradation of LA, was among a number of his songs highly regarded by a host of other musicians on the LA scene in ’68. Charlie’s contacts at that point included some of the most innovative heads in town: not only The Beach Boys’ reigning genius Brian Wilson but also Neil Young and producer David Briggs, Stones and Gram Parsons associate Phil Kaufman and The Byrds’ producer and Columbia Records executive Terry Melcher. The cloud of silence around the question of which LA musicians Manson might have actually played with still maintains. Frank Zappa’s name pops up occasionally, The Manson Family’s canyon-music-spooky-folk sound could have easily found a home on Zappa’s roster of musical eccentrics. Meanwhile, a long-circulating and false rumour that Charlie Manson had “tried out” for The Monkees was started by, of all people, Micky Dolenz… as a joke! Neil Young has always spoken highly of Manson the songwriter-and-musician, before and even after the murders. Young, had met Manson in the late ’60s, and wrote and recorded ‘Revolution Blues’, from 1974’s classic On the Beach, about Charlie and the “family”. In the early ’80s, Young performed the song live, announcing to the stunned crowd, “This is dedicated to Charles Manson.”

By the beginning of ’69 Manson’s relationships with the cream of the LA scene were done. He was becoming full-blown monstrous-minded, his criminal origins and prison-born race-paranoia bubbling to overflowing, as he spread the fear of “Blackie” and the “piggies” to all of the young, blond-and-blue-eyed followers on rhe Ranch, preparing them now for “Helter Skelter”, the race war he’d been predicting. It was the beginning of the end, his out-of-control paranoia and megalomania alienated him from potentially useful industry contacts and destroyed his skewed dream of becoming the next Dylan. His desire for revenge ultimately fuelling the rampage of murder that followed. While more recent rumours of Manson being a CIA stooge only serve to add to the apocryphal tales, it seems the truth about Charlie and his friends on the LA scene will never fully be known and maybe it’s better that way.

To purchase clothing from TSPTR click on the banners or here