NEIL YOUNG’s fourth solo album remains one of the most beloved in his catalogue and is dense with songs that have long-permeated radio waves. The 50th Anniversary Edition Harvest Box Sets will be released on the 2nd December on vinyl, CD and to stream, boasting the original album, three studio outtakes on CD/7” vinyl, an unreleased live 1971 BBC solo performance on CD, LP and DVD. The film Harvest Time is a previously unseen two-hour documentary filmed in 1971, documenting the Harvest sessions. Also included in the package is a hardbound book and fold-out poster. The vinyl box sets include a lithograph print. HARVEY KUBERNIK spills the beans with the help of some major-league key-players 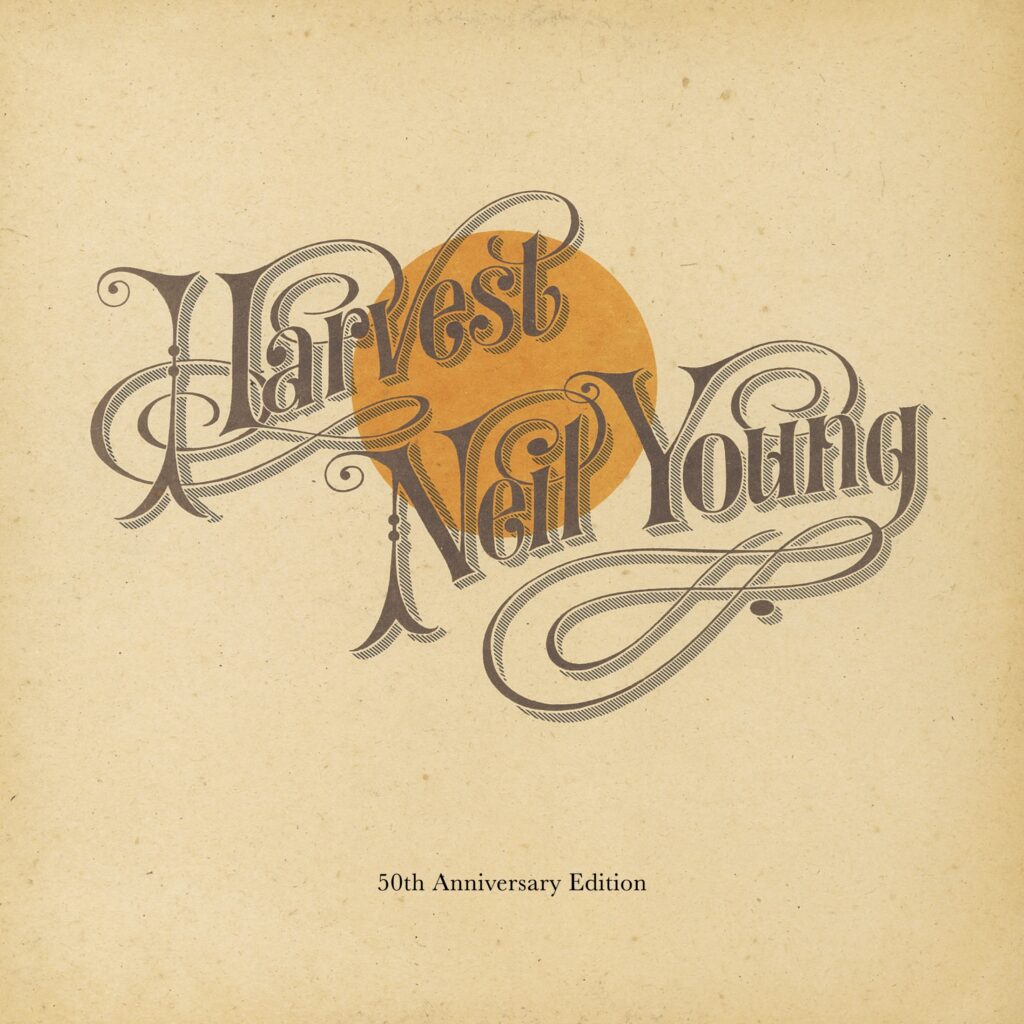 According to the press release announcement, “fans of the record will receive a new glimpse into I through the two DVDs included in the box set. The first is Harvest Time, an unreleased two-hour film shot during the making of Harvest, with footage from Young’s Harvest Barn sessions in Northern California, recording sessions in Nashville and London. The second is a film of the unreleased solo BBC Concert recorded on 23rd February, ’71. Also included are three unreleased tracks from the original Harvest sessions: ‘Bad Fog Of Loneliness’, ‘Journey Through The Past’, and ‘Dance Dance Dance’. Additionally, the hardbound book will include never-before-seen photos along with extensive liner notes by photographer Joel Bernstein.”

On 23rd February, ’71 at the BBC Television Centre in London, producer/director Stanley Dorfman filmed Neil Young for BBC’s In Concert. It was a pivotal UK small screen exposure for Young, who previewed some un-recorded material that would later surface on his epic ’72 album, Harvest.

Stanley Dorfman: “At the time I was co-producing/directing Top Of The Pops with a guy called Johnnie Stewart. We started it in ’64. Around ’68, I had the thought of having a show of singer-songwriters. And the first was with Leonard Cohen and Julie Felix. We then called them BBC In Concerts and the first one was with Randy Newman.

“When we started this thing, BBC2 had just gone colour. And the head of BBC2 was David Attenborough. And he liked folk music a lot. So I said, ‘Let’s do singer songwriters. Great.’
So, he sent me to California to find acts. And I met [David] Geffen and [Elliot] Roberts. It wasn’t a hard sell at all. The artists couldn’t get on television in England unless they had hit records. The reason Neil Young, Joni Mitchell and the others connected very strongly with the English audience was because they were folk music oriented. British love folk music. The Scottish, the Welsh, the Irish. Plus, Neil Young citing Bert Jansch and The Shadows in his interviews didn’t hurt.

“I loved the singer-songwriters of the time. To me they were the poets. Laura Nyro. Brilliant songs last forever. With all these acts, I never dictated what they should do anyway. They’d come over and we’d have a lunch and a chat. We had marvellous lighting and they lit these things like portraits.

“The other thing that I said to them before doing the program was that the editing would be very minimal. We had four cameras, five if you were lucky, no hand-held, so the only editing you would do was cut tunes out. Or put them in. So I told Neil and all the others, if they wanted to they could come to the editing room the next day and kind of decide how to structure the show. And they all liked doing that. Neil came. He was charming, lovely and delightful. Neil was not elusive in any of my dealings.”

In February ’71, Neil Young travelled to Nashville to tape The Johnny Cash Show. An ABC-TV national broadcast. Neil Young had a star turn on the Campus episode, performing ‘The Needle And The Damage Done’ and ‘Journey Through The Past’.

“One reason country music has expanded the way it has is that we haven’t let ourselves become locked into any category,” Johnny Cash assured me during a ’75 interview I conducted with him in Anaheim California for the now defunct Melody Maker. When I asked Johnny about his bold policy of booking established country artists and mixing relative new comers to his TV program artist lineup, he replied, “We do what we want.” Guesting around Young’s screen stint Cash spot were James Taylor and Linda Ronstadt. Huddled around a microphone, these three blossoming talents gave a taste of the burgeoning singer-songwriter movement in rock.

While in Nashville Young took time to record some new material. Serendipity played its designated role as always; a chance encounter with an acquaintance of Elliot Roberts, veteran producer/engineer Elliot Mazer, introduced Neil to a new set of musicians who would influence his sound from this point on. With Mazer handling the console at Quadraphonic Studios, Young laid down the tracks for what would become Harvest, his biggest seller and, for many, his most enduring work.

Elliot Mazer: “I had a friend who smoked a lot of weed, which I wasn’t then, who played nothing but After The Gold Rush a lot. That was the first time I heard of Neil Young. I was interested in the voice. All of a sudden we read about Neil coming to Nashville to tape The Johnny Cash Show. I said, ‘We need to host a dinner.’ Neil, Linda Ronstadt, James Taylor and Tony Joe White attend, have dinner, and I get introduced to Neil. ‘You work with these Nashville guys. Can I get the studio tomorrow to mess around?’ ‘Sure.’ I moved a session to accommodate him. And called some musicians.'”

The future Stray Gators, a bunch of good ol’ boys covered all the musical bases: rascally Tim Drummond on bass, the timekeeper from Dylan’s immortal Blonde on Blonde, Kenny Buttrey, on silky smooth drums, pianist John Harris, guitar player Teddy Irwin and Ben Keith, Neil’s future right-hand-man on yowling steel guitar. They would set the table for their irascible leader on countless gigs and studio sessions. For now, it was time to bring in their first harvest, and they all knew it was something special.

Elliot Mazer: “I knew ‘Heart Of Gold’ was a hit when Neil played it. His songs are generally an overpowering feeling. Kenny, Drummond, Ben, Teddy and I are in the control room. Small space. Twelve feet by 20 feet. And Neil plays ‘Heart Of Gold’ and I look up and Kenny and I both at the same time put our fingers up as #1. We knew it. From then it was only a matter of time to get the thing done properly and out. Neil’s singing and playing on it was magnificent. His tempo was perfect. It was great. All we had to do was make sure we didn’t mess him up. I used a Neumann U67 or 87 microphone on his voice and rode his sound levels.

Linda Ronstadt: “I sang in Nashville with Neil [at Quadraphonic]. We were doing The Johnny Cash Show and Neil was there. James Taylor was there. After we got finished with the TV show, Neil said, ‘I’m going to go record. Will you guys come along?’ So we recorded ‘Old Man’ and ‘Heart Of Gold’.  It took all night long. We didn’t get there until midnight. It was just before dawn, we came out of there and it had begun to snow.

“I remember I had to be on my knees for most of the session because James and I were singing together. But James was so tall, he had to sit in a chair, then I’d have to bend over to sing, so I knelt on my knees. I could just reach the microphone. (laughs) James was bent over and I was kneeling. So I was really tired by the time we finished. Because it took hours. But we loved the music. It was so good. James was playing a banjo. Actually, it was a guitar with a banjo head on it with six strings. That’s James playing banjo that you hear on ‘Heart Of Gold’. Two of the most beautiful, poignant songs. Neil is just the best. He’s my favourite writer from that time. I was a huge Neil Young fan. We didn’t think in those terms about those songs having an impact. I just went, ‘This is the best thing I’ve ever heard. I wanna be on it.’ I was glad that I got to sing on it. I had sort of learned how to do or how Neil’s harmonies go by listening to them on the radio. (laughs). I was just glad to be part of it.”

Elliot Mazer: “Neil and Jack Nitzsche went to London and did ‘A Man Needs A Maid’ and ‘There’s A World’ live with The London Symphony. Neil recorded ‘The Needle And The Damage Done’ from a [30th January, ’71] concert at UCLA’s Royce Hall. We did other tracks that were taped with The Stray Gators in California inside a barn on Neil’s ranch. We used a mobile truck with a UREI tube mixer. ‘Words’, ‘Alabama’ and ‘Are You Ready For The Country’. Nitzsche was on these sessions.”

Finally released in March, ’72, Harvest raced to #1 on Billboard, a defining moment for Neil Young.

“More than anyone in rock ’n’ roll, Neil Young has the guts to be romantic… If ‘Heart Of Gold’  is an admission, ‘A Man Needs A Maid’ is an outcry… Harvest also sounds better than any other Neil Young album.”  – Jimm Cushing, University Of California Santa Cruz, The City On A Hill Press, 13th April, ’72.