Since 1986 NICK SALOMAN has released tons of albums under the BEVIS FROND monicker. A new record, the excellent Example 22, is out now on Woronzow. ROBERTO CALABRÒ meets the psychedelic head to talk about his latest effort 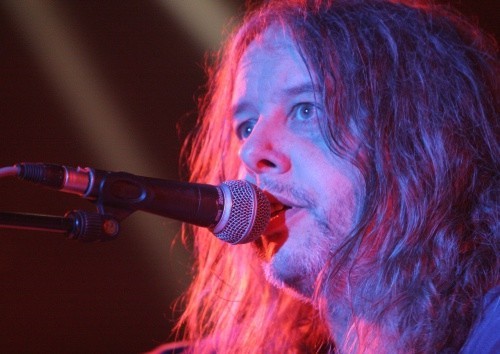 Shindig!: Between Hit Squad (2004) and The Leaving Of London (2011) you had a seven year hiatus. Why did you stop releasing music for such a long time?

Nick Saloman: I came back from a European Tour in 2004, and although it was a nice tour, I just felt like I’d had enough. I felt really jaded and tired, and I thought if I felt that way, it would certainly come through in the music. Also, my Mum was slowly dying of cancer, and I was spending every day with her. We had always had a bit of a stormy relationship, but she was a devoted single Mum who brought me up on her own, and we were pretty close, and to be honest, I just thought there were more pressing things I should be doing. So I figured if I had a bit of a break it would probably help. I never realised that it was going last seven years!

SD!: In recent years you released a double album, The Leaving Of London, then a triple one (White Numbers, 2013) and a double again this year (Example 22). It seems you’ve got an uncontrollable urge to write song after song.

NS: Well, I write songs all the time. I never stopped writing while I was having my Sabbatical, so when I felt like recording again, I had quite a lot of material to choose from. I really enjoy writing songs, and I’m always thinking up tunes and lyrics. It’s quite therapeutic.

SD!:You’ve just told me you write all the time. Keith Richards says that you don’t need to write a song, they’re in the air, you just need to tune in and catch them. Is it the same for you? Who or what inspires you the most?

NS: No, it’s not the same for me. I don’t get a net and go out catching songs. I love Keith, but that sounds a bit fanciful. I think you have to work at it. I don’t really need much inspiration to write. I think because I enjoy writing so much, that’s an inspiration in itself. I actually look forward to sitting down with the guitar and trying to write something. I know some musicians dread that blank sheet of paper, but I really like it.

SD!: You’re considered a legend of the UK psychedelic underground scene. Is there any new band that you like and what you think of the new psych movement of young bands like Tame Impala, Black Angels, Pond, and so on?

NS: My daughter likes Tame Impala, and they are pretty good. I like a lot of new stuff. Weird Owl, Blues Pills, The Mutants, Magic Bus, Golden Grass & Biscuit for example. We’ve played with a lot of these bands, and they’re really good.

SD!: You started Bevis Frond in 1986 in your own place. Now it’s a full touring band with a stable line-up. Do you prefer to be in a proper band or the freedom of being a solo recording artist?

NS: If I’m totally honest, I probably prefer working alone in the studio, though the current line-up is so good, that it’s been really nice and easy recording with them. Obviously it’s different when you’re playing live. That has to be with a band, and as I just said, this line-up is a bit special.

SD!: Cherry Red has recently launched a series of Bevis Frond reissues starting with the High In A Flat compilation. So far we have been able to re-listen to Miasma, Inner Marshland, The Aunt Winnie Album, Through The Looking Glass and Triptych. Are they going to reissue your entire back catalogue? If so, what are the next albums to be released?

NS: I don’t think Cherry Red are going to continue with the reissue programme. I don’t think the albums sold as well as they hoped they would, and it looks like they’re going to cut their losses and stop putting the albums out. The next one would have been Any Gas Faster, but that’s probably not going to happen, at least not on Cherry Red. There is another label currently negotiating with Cherry Red to take over the programme, but at the time of writing nothing is confirmed, so I better not say any more in case it doesn’t happen.

SD!: Let’s talk about your newest album, Example 22, which is certainly one of your best and most inspired releases. It’s a great mix of pop songs, hard-psych, ballads – even if your folkish vein is not present – and there are no long jams like in White Numbers.

NS: Well, thanks very much. Glad you like it. I thought there were a couple of “folkish” songs on it. ‘Vital Signs’, ‘Come With Us’ and maybe even ‘Where Is Egon Schiele?’, but maybe they’re not quite as acoustic-based. There are no 42 minute jams this time. I don’t think you can do that every time, though we did a 25 minute track called ‘Vertigo Eyes’ which we couldn’t fit on the record.

SD!: Any fave numbers on this album? The Hendrix-inspired ‘I Blame The Rain’, the powerpopper ‘Waiting For Sinatra’ and the melancholic ballad ‘Pale Blue Blood’ are top notch.

NS: I was particularly happy with ‘Waiting For Sinatra’, ‘Longships’ and ‘Pale Blue Blood’.

SD!: After 30 years as a recording artist under the Bevis Frond monicker your discography is a solid body of work. We can consider it as a music saga. Which of your records would you recommend to a listener who is going to listen to the Bevis Frond for the very first time?

NS: I’m probably the worst person to ask, because I like all my albums. The ones that most people go on about are New River Head and Valedictory Songs, but really like North Circular a lot. The more recent ones are a bit too recent to judge properly, though they do reflect where I’m at at the moment. But you only really get a proper perspective after a bit of time.

SD!: You keep on releasing Bevis Frond records through your own label Woronzow. For a period of time you also released records from other bands and artists such as Outskirts Of Infinity, The Flyte Reaction, Todd Dillingham or Adrian Shaw. Do you think you will release other bands on your own label in future?

NS: I don’t know. I might put some things out in the future I guess, but to be frank, it’s a lot of hard work and expense for not much return. I suppose the reward is in the doing of it, but I don’t really see myself as a patron of the arts these days. In the past I’ve worked with some great people who have become good mates, but there have also been some instances when things haven’t gone so well, and that’s really disheartening, because all I’ve ever tried to do is try to help acts to get along. I don’t want to be Richard Branson, I just thought that if I heard a great band who couldn’t get a deal then maybe I could help by issuing a record. Of course, it’s always nice if it makes a bit of money, but that was never the over-riding reason for doing it, and I know that some artists felt that I should have done more for them. So, who knows? I guess I would, but I really don’t want all the hassle, so maybe I wouldn’t. That’s a tough question!

SD!: Some years ago you moved from London to Hastings where you opened a record shop called Platform One. After having been an avid record collector for long time how does it feel being a record shop owner? Tell us something about Platform One and what kind of hidden gems we can find if we pay a visit to you.

NS: All the gems are on full view. It doesn’t make sense to hide them! I’ve been into vinyl since I was a little boy, and I used to sell at record fairs in the early ’80s. I’ve always fancied having a shop, but I never really thought I could give it enough time. It’s a bit of a commitment. But, I just figured the time was right to give it a try, so two years ago, I took a unit in an antique centre called Eras Of Style in Bexhill On Sea. It’s an old railway station, hence Platform One. The shop is vinyl only, and it’s open Thursday, Friday and Saturday only from 11am to 4pm. I don’t advertise online or do mail order. Everything I have goes in the shop. It’s very old school… you come to shop, browse through the records, and buy what you want. I try to make sure the stock is really interesting and not too expensive. There are certain artists who will never appear in the racks. You’ll never see any Phil Collins or Abba or Dire Straits there… not because they’re crap, but because you see them everywhere else. I sell albums. singles and EPs, and you’ll find anything from rock ’n’ roll, through jazz, folk, reggae, soul, blues, psych, prog, punk and indie to soundtracks. Platform One was voted number one record shop in the wondrous Shindig! Polls last year, so I must be doing something right. But don’t take my word for it… come along and make up your own mind.

Example 22 is out now on Woronzow