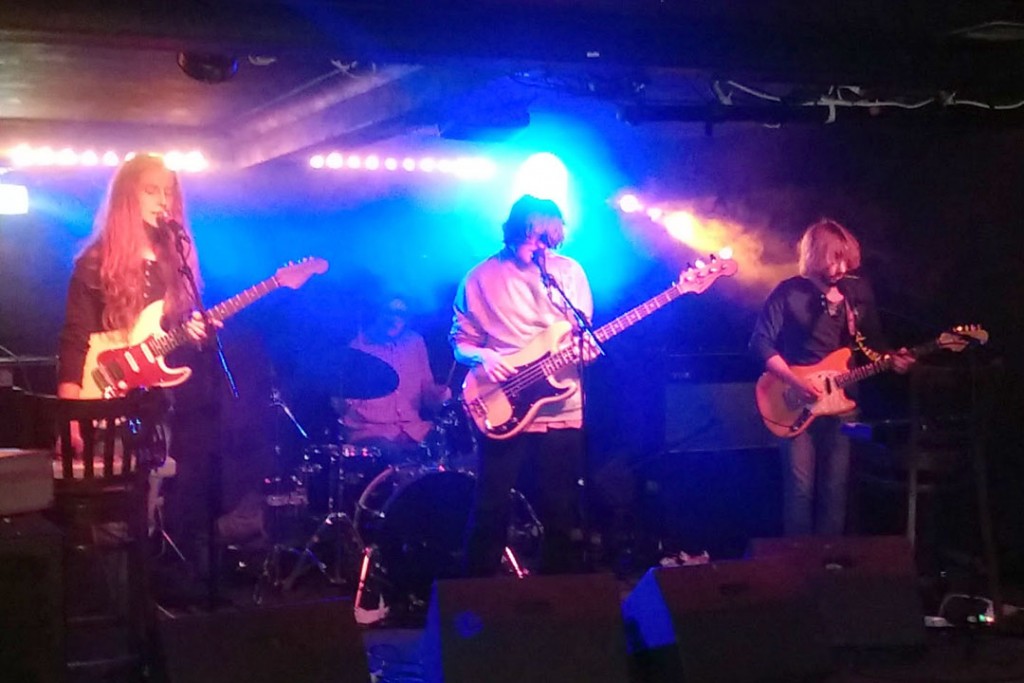 With perhaps more melody and harmonies than an East London boozer deserves on a Monday night, Oslo’s Gold Celeste lay waste to Hackney’s leaden December gloom with their particular brand of “Golden Psych Pop”. Their live London debut is part of a brief two-date (self-financed) jaunt to promote new LP The Glow (released on Riot Factory last September). Gold Celeste’s sound centres around the dual vocals of Simen Hallset and Eirik Fidjeland which are carried along by a slipstream of McCartney-esque bass shapes, West Coast guitar motifs, baby keyboard electronics, and the solid-but-loose drum dynamics of Petter Andersen. Highlights from the set include ‘Is this What You Should Not Do’ with its call/response dual-guitar chord theme sounding like a manic church bell being rung within an inch of its life. ‘Open Your Eyes’ shows flashes of The Flaming Lips, Caravan, and even Mad River’s dissonant chord structures which bubble up quickly before being washed over by the band’s trademark euphoric urgency.  New single ‘The Wonder Of Love’ is drenched in sugar-coated reverb and sounds like The Turtles dropping in for a jam with Tame Impala, while its wistful coda is permeated by the spirit of Saucerful-era Rick Wright. The quality of the song writing is refreshingly strong with the emotional compass pointing to sounds which soundtrack life’s highs (‘Time Of Your Life’) as well as tunes for those long, dark nights of the soul (‘You And I’).  Set closer ‘Like A Poem’ is transformed into something less ethereal live, and is extended to a brief jam with Simen remarking on the number of CCTV cameras on London’s streets before riffing on the main vocal melody of Neil Young’s ‘Don’t Let It Bring You Down’.

An interesting mental leap for sure.  If these gigs serve as a calling card for a future visit, then Gold Celeste are handing out the aural equivalent of those of the luxurious, thermographically embossed variety.  Hopefully 2016 will see them return to pick up where they left off. Be sure to catch them when they do.