ALAN PARSONS is most famously known for his Engineering work on Pink Floyd’s Dark Side Of The Moon and The Beatles’ Abbey Road.  He also worked throughout the ’70s with such various bands as The Hollies and Ambrosia, as well as his own work as part of The Alan Parsons Project.

In advance of Parsons’ return to the studios that featured so importantly in his early career, Shindig! was able to speak to Alan and ask about his time at Abbey Road to get an insight into those initial experiences there. MARC LE BRETON listens closely – in stereophonic sound.

Shindig!: How did you start at Abbey Road Studios in the first place?

Alan Parsons: I had already been working for EMI in an associated department called Tape Records, making reel-to-reel copies of EMI’s product featuring all the big names of the time, whilst also making copies of masters for overseas as every record factory in the world needed its own copy. It was all fairly primitive. I got an interview with the boss at the time, Allen Stagg, and a couple of weeks later I started working in the tape library of all places.

SD!: So did you progress to the Tape Operator role at that stage?

AP: I progressed very quickly as it was usually traditional to spend several months to a year at the tape library before they were let loose on sessions but, in my case, it was within another couple of weeks that I came down to watch sessions as this formed part of the training. The very first session I sat in on was with The Gods, with Ken Hensley playing keyboards rather than guitar as he did with Uriah Heep later on.

SD!: In this period, who else was recording in the studio that you were there for?

AP: A lot of the Harvest label bands recorded at that time too; Edgar Broughton, Roy Harper, Pink Floyd of course and The Third Ear Band. Also, all the light music stuff like Joe Loss, Manuel And The Music Of The Mountains and so on. It was so diverse it was unbelievable. I seemed to get Pinky & Perky more than most people and it used to drive me nuts!  The backing track would be done at normal speed but the  vocals were recorded at half speed and I remember doing a Christmas carol album where a three minute version of ‘The First Noel’ would take six minutes with these guys singing in very, very slow voices!

AP: I considered myself to be the luckiest guy on earth. There I was, wanting to become a record producer and having the perfect training with the great engineers that were working there so I was just in heaven.  There is a magic in that building that just stays with me. It just has this amazing atmosphere that nowhere else has.

SD!: You’re credited as Tape Operator for the legendary rooftop concert by The Beatles at their Apple HQ. What are your recollections of the day?

AP: An amazing time! That was my first meeting with The Beatles. I was sent down by Abbey Road to help out at the basement studio there, which was just not working because of the infamous “Magic Alex”. We installed some of the mobile equipment and I was sent to operate the tape as they hadn’t bothered to take on any staff and, of course, they were making the film as well (Let It Be) so we were constantly recording. For me to walk into the room there with George Martin, all four Beatles and their girlfriends, Glyn Johns… it was quite an experience for a 19-year-old!

SD!: Your contribution to Pink Floyd’s The Dark Side of The Moon is well known but what was your role on Atom Heart Mother?

AP: I worked as Tape Operator on the recordings and then Peter Bown, the engineer, was unable to stay on to do the mix so I ended up doing it, which was very nice and established our relationship.

SD!: When preparing for your forthcoming talks, what’s been interesting to look back on?

AP: It’s been great. I went through all my old diaries and had logged down just about every session I did. I think Pink Floyd’s going to be a big part of it because we’ve got their permission to play the multitracks and play individual tracks from the 16-tracks as well so that’s going to be fun!

A book surrounding the topics that will be discussed is also available now. Full information here.

The deluxe reissue of  The Alan Parsons Project The Turn Of A Friendly Card is out today. Pre-order here. 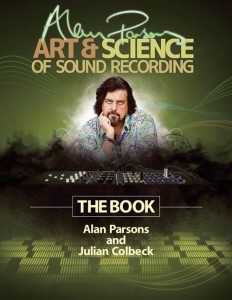 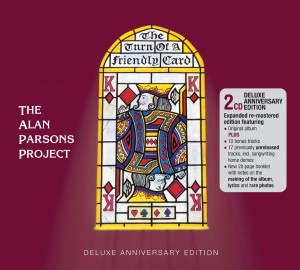