This Hallowe’en, the spooky surroundings of North London’s Union Chapel will ring with the sounds of menacing electronica as the Grade I listed Victorian venue hosts two rare appearances by film composer ALAN HOWARTH. As part of the annual film event ‘Chills in The Chapel’, Howarth will be performing live scores from his collaborations with John Carpenter; 1981’s Escape From New York and a medley of music from the Halloween films. CHRISTOPHER BUDD caught up with Alan as he sharpened his pumpkin-carving knife. 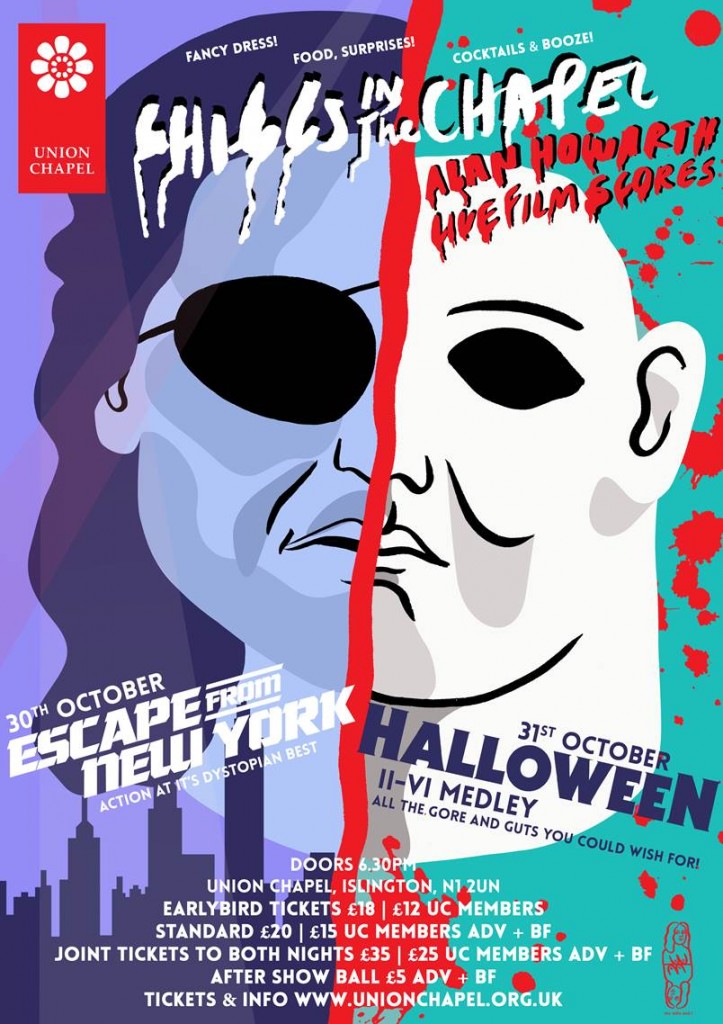 Shindig!: Why have you chosen these particular scores to play live?

Alan Howarth: As for the Escape From New York score, I’m working on a new vinyl release of a re-recording of that soundtrack. At the same time there is a potential reboot of the film over at Fox right now – John Carpenter has agreed to be the Executive Producer. And obviously Halloween is Halloween, we’re doing it on Hallowe’en night! We’re going to revisit the horror elements that I’ve done with Carpenter. So besides Halloween I’ll do something from They Live, Prince Of Darkness, a little Christine, I’ll do a little medley of horror films as part of the set.

SD!: You have a background in surround sound and acoustics, are there particular challenges in playing these scores live that affect the kinds of venues that you pick?

AH: Well at this point, we’re keeping it just as a stereo programme, because of the budgetary constraints of going into someplace just for one night, without the chance to set up an elaborate system. At some point if my shows get more popular I would definitely expand into a more “surround” or immersive programme. The essence technically is we’ve got the laptop that’s got a music sequencer on it, we have a video that is also synchronised with the sequencer, so there’s the video and – we’ll call it a backing track – so there’s “music minus one” or “music plus one” in this case! So you’ve got the original scores, and then I have dialled up in software synthesisers a lot of the original sounds and so I improvise or play along with the tracks I played with Carpenter from the past. And so that puts a new live performance element to it. So it’s a lot of fun!

SD!: How did you get involved with John Carpenter in the first place?

AH: The very first movie I ever worked on was Star Trek: The Motion Picture. I was on board that as a sound designer, creating warp drives and transporters, and the picture editor from that movie, a fellow named Todd Ramsey, his next assignment was Escape From New York. I had been giving the picture editor cassettes of my music, because I was a musician but sort of modulating my musician skills to be a sound designer, and the opportunity came to meet John Carpenter through him. And it was pretty low key. I was all set up with my little rented house in Glendale, California. John came over and I had my rig set up in the dining room. I played him some music and some sounds and at the end of that meeting he said “Yeah let’s do it.” So that was sort of the commitment. No agents, it was just two guys that said ‘hey this sounds like fun, let’s do it’. And so my first film score was actually Escape From New York with Carpenter.

SD!: Given that Carpenter came from such a DIY approach to music, did that make it easier or harder for you to work with him – and for him?

AH: Actually I’ll say easier. Because now you have a co-composer that’s the director that wrote the movie – so he knows what he wants! So the searching for “What are we gonna do here?” was eliminated. He was sitting right there! And a lot of times he would take the first pass, he would have a theme in mind. He’s a master of themes, simplistic themes, hence the Halloween theme. The note structure of Escape From New York’s opening theme, that’s his. He walked in, had that figured out. And so in the beginning I was more the studio producer guy. I had all the toys; he had the movie! And we’d just get together and do it.

He was very willing to share. I remember one of the things he said was “Alan, there’s only one rule – that there are no rules. Whatever you can think of, let’s do it’. So it was very collaborative and just a lot of fun. Carpenter would say that being his own composer was like going on vacation because [after] his responsibilities in making the movie – director, producer, big crew, schedules budgets et cetera et cetera, he could finally kick back, turn off the phone, and kind of enjoy doing something for his own movie on his own with just one other person in the room, very relaxed. So it was always really a very positive creative environment.

SD!: You’ve built a career in music and in sound effects and obviously there’s a big area in the middle of that Venn diagram, but do you enjoy one of those disciplines more than the other?

AH: I like the way they feed in to each other! You know one of the most basic definitions in music is the alternation of sound and silence. So in a lot of ways sound design is music to me, it’s just recast in a more abstract way. When I was in high school I was into musique concrète, there were guys making things with tape recorders, the Stockhausens and the Ussachevskys, and Silver Apples Of The Moon and all this sort of weird synthesiser stuff really appealed to me. So asking me to make the sound of the USS Enterprise on a synthesiser was like “Okay, cool, another effect.” So it just kind of blended in. And then the big lesson in the world of sound design, beyond synthesisers, was dealing with organic sound – which at the time was tape recorders. There was no digital sampling of anything. So it was really tape manipulation; speeding things up, slowing them down, turning them backwards. Making loops that were 30 feet long, the tape was spliced and ran off the tape head and ran off round the room round some mic stands and came back in again. So all that sort of experimental stuff was done with tape. And so when we finally did get samplers I had this whole skill with tape that I immediately applied to sampling. So I fell right into that. It was a good fit.

SD!: Were you aware of the likes of Tangerine Dream and Goblin doing similar work in Europe at that time? Did it feel like you were a part of a movement or did you feel like you and Carpenter were working in isolation?

AH: We were big fans of Tangerine Dream for sure. I liked Klaus Shulze, some of the other guys that were out there, obviously the Wendy Carlos influence, the Tomita influence… I remember actually when we did the score for Halloween III Carpenter and I sat down, we played the latest Tangerine Dream record, just to kind of see what they were up to, what were nice textures, what did we like, and he turned to me and he said ‘Hey Alan this is going to be really easy, we’re just going to rip ourselves off’. Basically he was saying “I loved what we did for Escape From New York, let’s just do some more of that.” And then we launched into Halloween III, which was a departure from the Halloween themes, because the movie wanted to depart from the Michael Myers themes. And I get a lot of great feedback on the Halloween III score that the life of the score outlives the movie, and so that represents some really good electronic work.

SD!: You came from a band background before you started working in films. Who were you inspired by then?

AH: Well you know it all starts, as a Junior in High School, being a Beatles guy and then moving on to Pink Floyd and Genesis and The Moody Blues, that prog-rock world, Emerson, Lake & Palmer, and then obviously the whole Led Zeppelin… impact to music. Actually I was a bass player in the band at that time, a singer-bass-player guy. Our band made a record, on ABC records, called Smooth As Raw Silk. Our producer was Bill Szymczyk who went on to do Joe Walsh and The James Gang and then on to do The Eagles. We actually opened for The Who, we opened for Cream, so all that contact really influenced me too.

SD!: Just back to thinking about your shows, at the moment there’s a real trend for live renditions of scores. When you’re writing a score now is part of your brain thinking about whether you can play it live? Does it influence how you write a score now?

AH: No, I do whatever I’m gonna do. I’m providing a service for a movie or video game, or whatever it is. We create that as a service provider; do the best job we can. And if it turns out the movie is popular and people would want to want to hear that music again, we’ll figure it out! The technology is so amazing now that I don’t think there’s anything you really couldn’t do live, with either a budget… or like I say I use a backing track, there could be half the track already pre-recorded, and the hard part could be already resolved in the recording as opposed to having to do all the licks and all the stuff in real time.

SD!: What’s next after this? Are there other scores you’d like to perform live?

AH: I’ve been working with a lot of young filmmakers. It’s interesting that the movie business is sort of bifurcated; much like the white middle-class is gone in America, the middle movies are gone. So it’s either a hundred million dollars and Hans Zimmer or it’s people doing it on favours and credit cards. So I have a lot of compassion for the lower budget folks, and if somebody approaches me, I can make a deal! If there’s some way to pull it off for them I’m going to do it. You never know who’s going be the next John Carpenter or George Lucas!

I’m going be at HorrorHound in Cincinnati in the spring, there’ll be a composer forum and I’ll probably do a live show. A lot of the horror movie conventions turn out to be the place to go. Usually it’s just the actors and the makeup people but I’ve kind of tagged along now as the one composer you can have in and he’ll play a show on Friday or Saturday night as well as meet and greet and sign CDs and stuff like that. I enjoy that!