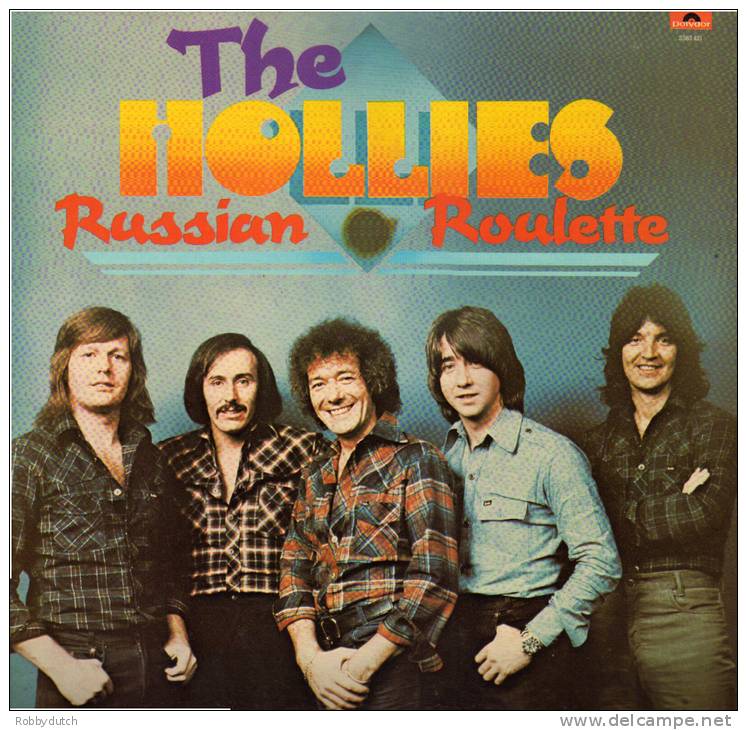 After 11 frustratingly tumultuous months in the studio, in December 1976, The Hollies released their fifteenth studio LP, Russian Roulette.

“It was a gamble” claimed lead singer Allan Clarke when reflecting on the inspiration behind the album’s utterly un-Hollies-like title. “[We were] experimenting with different sounds and different ways of writing songs’.” Unfortunately for Clarke and the rest of the group (at the time, consisting of originals Tony Hicks and Bobby Elliott on lead guitar and drums, as well as fellow Mancunian bassist Bernie Calvert and Liverpudlian Terry Sylvester on rhythm guitar), it was a gamble that didn’t necessarily pay off; similarly to the group’s previous four studio efforts, the album received little promotion from the record label, and as a result, didn’t even scratch the lower echelons of the charts. With the exception of a surprisingly successful live LP in March ’77 (Hollies Live Hits, that climbed to number four in the UK charts and was named as “the greatest live album of the ‘60s and ‘70s”), this was a pattern that the group would see continue until after Clarke’s departure in ’99, as they released LP after LP, but to no mainstream avail.

Singles-wise, one might be forced to argue that the situation was even worse –‘Wiggle That Wotsit’ (released as a single in October ’76) was The Hollies attempt to “go disco”, and it was surely popular consent that confirmed that Clarke, Hicks, Elliott, Calvert and Sylvester “shakin’ their shimmies’” and “rub-a-dub huggin’” their latest girl was the absolute nadir of their mid-70s career. Calvert cringed when anyone mentioned the track, but whilst Clarke initially described it (in true curt Mancunian style) as “abysmal”, the singer did later attempt to defend the track (and indeed, the whole LP) saying that “everyone [in the late ‘70s] went into glam rock and disco-type stuff… you had to change with the times if you wanted to stay in the business.”

How it is, then, that a group who had spent the majority of their career carving their own recognisable style – that instantly recognisable “Hollies harmony” that was surely as contemporary and long-lasting as the music of The Rolling Stones or Bob Dylan – had fallen from the great heights of racking up more hit singles than any other group in the ’60s (with the inevitable exception of The Beatles), to “wiggling their wotsits” with not even a snippet of Hollie-harmony within earshot, much to the displeasure of critics and fans alike?

The departure of the group’s long-time producer Ron Richards (“It seemed when he left, [The Hollies] stopped having hits”) may have been one reason for this; lack of distinct image, lack of promotion, and the ever-widening age gap between the group and their Bay-City-Rollers-loving teenage audience may have been a few of the others.

However, with the band’s long and often complicated history during this period, I think a question such as that is best left up to an expert to answer – namely Bobby Elliott, inspiration to the likes of Phil Collins and Cozy Powell, and Hollies drummer since the group was founded in ’62…

Shindig!: During the ’70s/80s, did it ever feel wearing to keep making albums and to not have them sell as well as you’d hoped?

Bobby Elliott: We were contracted to supply a set amount of titles per year to EMI. There was pressure on the band to come up with the goods. Unfortunately, Some of the songs were not up to Hollies standard. ‘Long Cool Woman’[US #2 and Cashbox Magazine #1] from the Distant Light sessions was an unexpected bonus in the early ’70s. At the time of recording we presumed that it would be just another album track.

We have to thank Don Ellis at CBS/Epic in New York for spotting the song’s potential.

SD!: What was the most difficult Hollies album to make during this period, and why?

I remember that he brought the landlord from his local pub in to Studio Three at Abbey road to ask his opinion on our previous night’s work. The guy was wearing carpet slippers.

Sadly, that was the end of our relationship with Ron.

SD!: Did any true tensions ever arise within the band during the making of these later albums?

BE: You need a certain amount of tension. We all like a drink, but alcohol did get a grip on one of the guys.

SD!: What do you think was the most significant factor that contributed to the drop in sales of Hollies albums during the ’70s/80s?

BE: We were victims of our own success. Chalk and cheese singles – from ‘Heavy’ to the totally different ‘Long Cool Woman’ – confused a public that like to pigeon hole artists and bands… maybe our albums didn’t reflect the type of single that we were known for.

SD!: As a band, did you ever feel neglected in terms of promotion of your music?

BE: When an artist is not in the charts there is a feeling of being neglected. If the songs aren’t good enough, then they don’t sell…

SD!: How did you feel when Nash called the Dylan album “too Americanised” and “sickly”, when after he left the Hollies he went straight to America and started making similar music [to that which was on Hollies Sing Dylan]?

BE: Willy is a great salesman and cheerleader. He was playing for a new team. Dylan heard our album and sent his thanks.

SD!: Do you think it was the Dylan album which was eventually the catalyst for Graham leaving the band, then?

BE: Graham had found new friends in the States, split with his wife and wanted a fresh start in the New World. [Indeed, Graham Nash left The Hollies to lay the foundations of what was to become his new group, CSN, with new-found friends David Crosby (ex-Byrd) and Stephen Stills (ex-Buffalo Springfield)].

SD!: Okay, so, who’s idea was the Dylan album, and were the other Hollies proud of it in terms of musical content?

BE: We are Bob Dylan fans. Tony felt that his songs sounded unfinished. We took a handful of his titles and finished them off Hollies style.

The Hollies Changin’ Times: The Complete Hollies: January 1969-March 1973 is out now on Parlophone

2 thoughts on “The Hollies: The Twilight Years from Dylan to disco”