You what? Miley in Shindig! Well, yes. The one time Hannah Montana has been getting very “off it” with The Flaming Lips and a host of fried guests including Ariel Pink. This is the result. 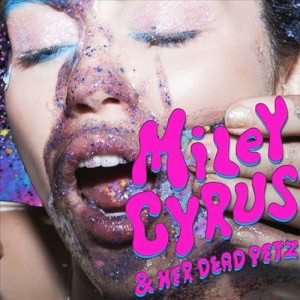 It’d be easy to write off Miley Cyrus. She’s a former child star known primarily for scandalous behavior. How could anyone possibly take her music seriously? Admittedly, I didn’t until Cyrus and a friend visited the shop where I work. I watched as they spent 45 minutes pouring over every record in the place. In the end, Miley walked away with an impressive stack of vinyl, including copies of White Light/White Heat, Unknown Pleasures and The Madcap Laughs. I wondered at the time, will these records rub off on her music? Now that I’ve heard Miley Cyrus & Her Dead Petz I’m certain they have. Actually, I believe Wayne Coyne of The Flaming Lips has probably had the biggest influence on Cyrus’ new music. His freaky presence is all over the new album.

The very idea of Miley and Wayne working together entices me. Both seem so adventurous and freaky, what could they possibly achieve together? I’m pleased to say, Miley Cyrus & Her Dead Petz is a powerful declaration of personal independence and artistic ambition. At 23 years of age there hasn’t been enough time for Cyrus to grasp or assimilate much of rock’s rich tapestry, yet by aligning herself with Coyne she’s tapped directly into The Flaming Lips’ sense of limitless musical possibilities. On the album there’s a feeling the songs are being created spontaneously, yet once they sink in its obvious craft is involved. The lyrics often seem like random streams of thought, but they add up to something meaningful, or at least it feels that way, which is important. Stylistically, there are no boundaries, and of course, this makes it difficult to characterize the music. “Psychedelic” is the word that keeps coming to my mind, but I’m not sure some Shindiggers will hear it that way. For many of you (but not all) it won’t be possible to transcend the retrogressive aesthetic. That’s too bad, really, because Miley Cyrus & Her Dead Petz is definitely a trip worth taking.