THE PINKERTON RAID is the solo project of North Carolina based singer-songwriter Jesse James DeConto. New song ‘Merseybeat’ was  inspired by conversations DeConto had with musician Scott McFarlane (who plays drums on the track) about his family farm in the country outside of Liverpool, where for years they’d host garden parties filled with music and dancing

A wistful, sepia-toned snapshot of a song, The Pinkerton Raid’s chiming new single ‘Merseybeat’ brings a long-faded sound from a distant time and place echoing back to the present, shimmering as if born anew. In name and in sound, the track is a heartfelt nod to the ’60s Merseybeat scene, whose music – by bands like The Searchers, Gerry & the Pacemakers and, of course, The Beatles – reverberated from the basement clubs of Liverpool all the way around the globe.

“For me, every song begins with a story,” says The Pinkerton Raid’s singer-guitarist and mastermind Jesse James DeConto. “I was inspired because drummer Scott McFarlane – who plays on the ‘Merseybeat’ single – spoke with so much love about where his mom’s family came from: a rural village called Thurstaston in England’s Wirral Hundred.”

The Wirral Hundred lies on a peninsula between the Rivers Mersey and Dee, with Wales across the Dee and Liverpool across the Mersey. Given its close proximity to the latter, the Liverpool Football Club is the area’s most beloved sports team.

“Scott introduced me to ‘You’ll Never Walk Alone,’ the Liverpool F.C. fight song,” says DeConto, “which was written by Rodgers & Hammerstein and made famous by Gerry & The Pacemakers. The two of us connected around the Merseybeat sound, the Pacemakers and, of course, The Beatles. He was always talking about how beautiful Thurstaston was; how his grandfather had a farm there, where his family hosted these garden parties and played music into the night. When I wrote ‘Merseybeat’, I was trying to capture the feeling his stories evoked of this beautiful, slow-moving, pastoral place, while at the same time nodding to the original Merseybeat music scene.” 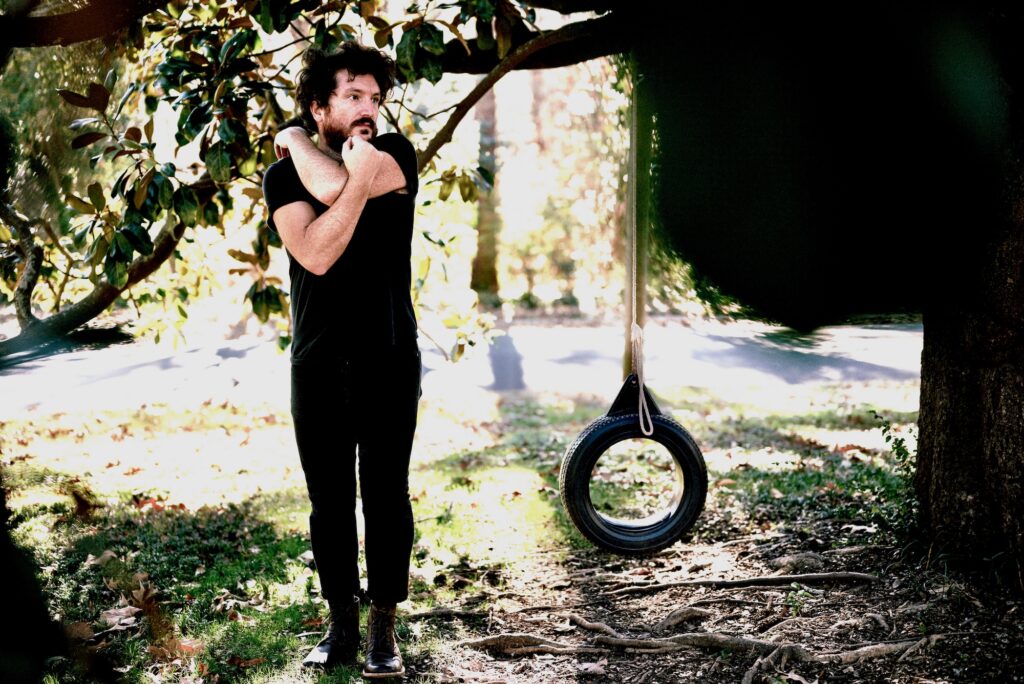 The sessions for the single were helmed by producer David Wimbish of North Carolina band The Collection, who toured recently with Larkin Poe. Over the last few years, Wimbish and DeConto have built a close creative relationship, working together on several of The Pinkerton Raid’s releases, including 2018’s Where The Wildest Spirits Fly and all of the band’s recent singles. “I admire David so much,” DeConto says. “He’s a musical savant who plays everything – brass, strings, vibraphone. Even more importantly, when we’re in the studio together, I feel understood. He recognises my strengths, sometimes better than I do, and he pushes me toward them.”

For the recording of ‘Merseybeat’, DeConto and Wimbish were joined by McFarlane on drums, longtime Pinkerton Raid bassist Jonathan DePue, and also Garrett Langebartels, who added a second electric guitar in a live-tracked session. DeConto had pre-recorded the acoustic guitar, and Langebartels improvised his part in the studio, playing off DeConto’s acoustic and electric. “The acoustic guitar grounds things in this rural, folky kind of place, but then it’s got these chiming electric guitars too,” DeConto says. ‘Merseybeat’ didn’t seem to call for any additional overdubs beyond the lead vocals. “It felt complete after the initial tracking sessions.”

The Pinkerton Raid will be hitting the road this June in the lead up to the release of ‘Merseybeat’. After sitting things out for most of the pandemic, DeConto is ready to get back to doing what he loves most—playing live in front of an audience—and he’s got a brand-new touring lineup along for the ride: Derek Skeen on bass and backing vocals, utility player / “unicorn” Luis Rodriguez (of Aquarian Devils) on guitar, trumpet, keys, percussion and backing vocals, and a rotating cast of drummers.

The Pinkerton Raid’s ‘Merseybeat’ single is out 8th July.  The song is dedicated to the memory of Helen Kendrick McFarlane – mother of ‘Merseybeat’ drummer Scott – who passed away in January after a long battle with cancer.

One thought on “The Pinkerton Raid ‘Merseybeat’”