Perhaps it was idiosyncrasies of their material or their untouchability as a performing unit, but THE WHO didn’t attract the abundance of cover versions that peers like the Stones and Kinks did. Beyond a handful of US garage bands, Euro beat acts and Antipodean anomalies, their catalogue remained largely sacrosanct until the late ’70s powerpop boom and subsequent glut of tribute albums.Allow us to smash our way through 10 exceptions to the rule from the group’s ’60s/early ’70s heyday; from commercial pop arrangements to underground rave-ups and beyond – as featured in issue #128

Given producer Shel Talmy’s nous when it came to promoting songs written by artists signed to his production company, it’s no surprise that this sprightly Pete Townshend song was foisted upon south coast R&B act The Untamed for their debut single on Talmy’s own Planet label. It’s a super-charged performance that retains the tinkling piano and fuzzed-up power chords of The Who’s own version, released a week earlier on My Generation, guaranteeing the single a cache among collectors and connoisseurs of prime mid-60s UK mod-rock.

Still the daddy! Southampton quartet The Fleur de Lys (sometimes Les Fleur de Lys and Fleur-de-Lys) cut this incendiary version for their second single, released just two weeks after The Who’s own versions (one produced by Shel Talmy, one by the group) had appeared on the B-sides of ‘A Legal Matter’ and ‘Substitute’ respectively. The Talmy cut was intended as the follow-up to ‘My Generation’ but demoted when The Who fled to Reaction Records and instigated the complex contractual wrangles that would plague their 1966 releases. Phil Sawyer’s lead guitar work on the Fleurs’ version remains stunning; undimmed by its ubiquity following myriad appearances on freakbeat and psych comps.

So Sad About Us

One of The Who’s best loved and most covered songs, ‘So Sad About Us’ was gifted to Tony Crane and Billy Kinsley, who shared management with The Who (Kit Lambert and Chris Stamp), as the follow-up to their #4 hit ‘Sorrow’. With The Who temporarily hamstrung by the ongoing Shel Talmy legal case, Pete Townshend demoed the song at home in mid-1966. The group debuted the song on a BBC radio session on 13th September and cut the A Quick One version in November. The Merseys’ ornate version, reportedly produced by Townshend himself and somewhat over-arranged and over-extended by Phil Dennys in full “wall of sound” mode, failed to chart.

Minneapolis toughniks The Litter undoubtedly alienated their supposed 13-year-old girl audience with debut single and now feral garage-punk classic ‘Action Woman’. Tucked away on its flip is a heavier, slightly re-titled take of My Generation single ‘A Legal Matter’. While countless garage bands offered lively covers of early Who 45s, few, if any, added much. The Litter’s version benefits incredibly well from the country-ish melody line and adds extra grunt to the guitar. A decent version of ‘Substitute’ was also included on their 1967 debut LP Distortions, which tags original instrumental ‘The Mummy’ onto the end. Proper fans.

Unlike contemporaries like Ray Davies and the Marriott/Lane partnership, Pete Townshend wasn’t known as a prolific donor of songs. But there are exceptions and this is one such example (see also The Naturals’ ‘It Was You’ and Oscar’s ‘Join My Gang’). The Pudding’s take on ‘Magic Bus’, released almost 18 months before The Who’s Bo Diddley-goes-heavy version, is more restrained yet remains a perfect example of beat music getting a little daring and adding tasteful proto-psychedelic and baroque touches. The Pudding itself has remained shrouded in mystery but, if rumours are to be believed, the group was made up of members of Decca acts of the day such as The Overlanders, Hedgehoppers Anonymous and The Settlers.

Best remembered as the drummer with post-1969 Jefferson Airplane and its Hot Tuna off-shoot, Covington had been a jobbing drummer around his native Pittsburgh from a tender age and joined Dick Clark’s Caravan Of Stars while still in his teens. “Discovered” by Kim Fowley and marketed as a singing drummer, his inauspicious solo debut was this endearingly lo-fi crash-bang-wallop run through John Entwistle’s signature song, issued in a picture cover bearing full sponsorship from Vox, whose recently patented wah-wah pedal looms large.

We’re Not Gonna Take It

Having gained rave reviews in the LA production of Hair, the young Jennifer Warnes was signed to London Records subsidy Parrott. Her second album opens with a brace of songs from Hair but closing Side One is a gutsy take of Tommy’s epic closer that also gave the album its title. It starts in a near hush before brassy bombast and a raw soul-rock delivery tear the roof off. The track was arranged by Al Capps, who certainly saw great promise in its potential, re-recording it with Sunday league vocal harmony band The Mother Love for their Epic album Carousel Of Dreams the following year. 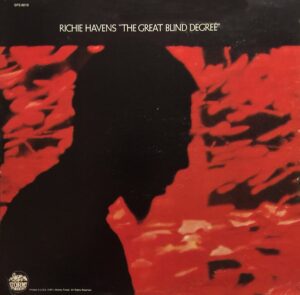 One of the great unsung pop interpreters of the era, Richie Havens tackled numerous Beatles, Bee Gees and Donovan songs on his late ’60s/early ’70s albums. Quite how he ended up covering Tommy throwaway “Tommy, Can You Hear Me?’ is anybody’s guess, but it seems likely that an association with The Who that led to Havens performing in the 1972 London stage adaptation of the musical (alongside Sandy Denny, Rod Stewart, Steve Winwood, Merry Clayton and, um, Peter Sellers) was already established when he cut it for his eighth album in five years. And could the album title be a nod to the source?

By opening their sophomore album album with a version of The Who’s then-recent Transatlantic hit LaBelle turned the song into a statement of radical intent; a paean to the unsettled times in which they were living. Patti and her girls take the projected closing track for Townshend’s Lifehouse project to another level. These ladies sound like they mean business. This blast was recorded  just a year after their collaboration with Laura Nyro on Gonna Take A Miracle, which sounds tame by comparison. On their next album LaBelle would be covering Gil Scott-Heron, but choosing The Who’s song here goes to show what a respected, socially-charged lyricist Townshend was. Heavy Soul and then some.

Hawaiian Elliman landed a starring role in the London production of Jesus Christ Superstar in 1970, reprising her role for the ’73 film adaptation. Her concurrent musical career found her recording Dave Mason, Gilbert O’Sullivan and Stephen Stills songs to critical, if not commercial success. This red-hot soul-rock take on The Who’s ’65 debut, released on Deep Purple’s prolific and eclectic Purple label, features Townshend himself on lead guitar, alongside an all-star cast including Caleb Quaye, Michael Giles and John Gustafson. Three years later she hit Top Fives around the world with Saturday Night Fever’s Bee Gees-penned ‘If I Can’t Have You’

Those early Who anthems attracted a handful of covers from the US garage scene. Cue Oscar & The Majestics, King-Beezz (‘I Can’t Explain’), The Bards, The Rovin’ Kind (‘My Generation’), The Trojans, The Last Words (‘The Kids Are Alright’), The X-Treems, Rain (‘Substitute’). Notable outliers during this time-frame include Lord Sitar’s 1968 run at ‘I Can See For Miles’, Joe Renzetti & Tony Luisi’s electronic redux Electric Tommy (The World’s First Rock Opera) in ’71, The New Seekers’ hit medley of ‘Pinball Wizard/See Me Feel Me’ in ’72 and Harry Stoneham’s Hammond-heavy supermarket muzak reading of ‘Let’s See Action’.