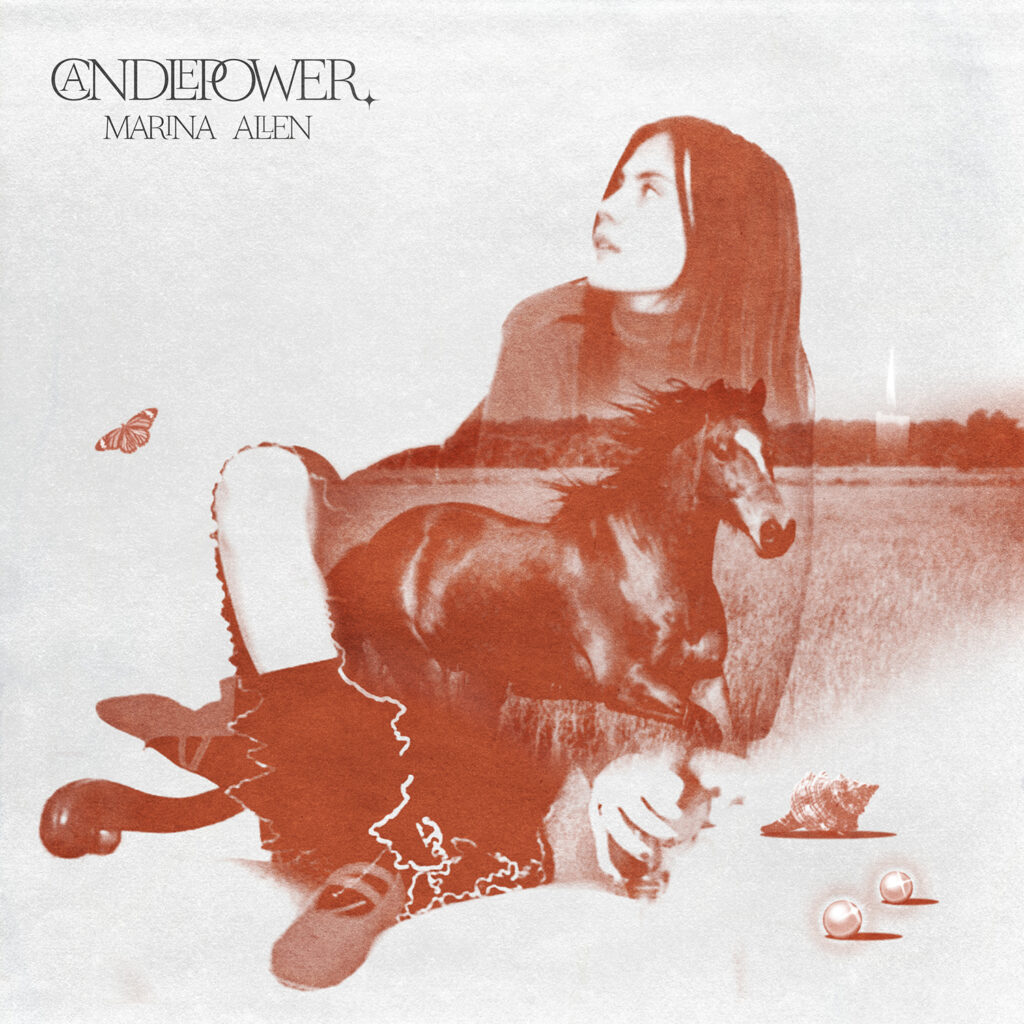 Let’s start with facts: if you haven’t already listened to Marina Allen’s Candlepower, out now on Fire Records, we heartily recommend you do so. Whether you favour folk’s most transcendental side, the ageless charm of Laurel Canyon-y singer-songwriters, prismatic amalgamations of genres and influences, or lyrics with a penchant for magic realism, this will be a new favourite. It is one of the most stunning (and promising) debuts of the year.

Talking to Marina, one gets a sense of just how layered the understanding and the meanings of these songs – 19 pristine minutes – can be. Elegantly considered folk, we called it in Shindig! #116: the gorgeousness is immediate, and stands on its own, but a profound sense of discovery comes with it – instinctive yet sensuously recondite, it’s tempting to get lost in the seven tracks and their pensive wanderlust.

Opener ‘Louise’ caught our attention months ago. Echoes of Judee Sill, Albion folk, Weyes Blood and Laura Nyro all merge in the most captivating way. The titular character is both fictional and real, Marina explains: “It was inspired by someone whose name is actually Louise. She’s in the LA DIY music scene, the leader of this group called Banny Grove. I always describe her as the DIY fairy godmother. Her energy is very fearless and radical in a way that is really about being sincere and genuine and not in this sappy or ironic way – which I feel is very hard, and indicates to me that this person has done a lot of their own work on the matter. Her shows were illuminating to see; the longing or pain that I felt in not being able to be as free as I wanted to be… The Louise of the song is this sort of amalgamation –I don’t know her personally, so she became this fictional character basically.” Louise, she considers, was crucial in unlocking aspects of herself that were deeply buried: aspects that felt more innocent and playful and vulnerable. “In the indie world especially, people assume that vulnerability means talking about your sorrows and troubles. I do that too, but it felt like uncharted territory for me to talk about a deeper sense of freedom in vulnerability, and talking about sharing your own personal joy, which is really scary to do – that’s something you learn how to hide pretty young.”

Louise isn’t the only powerful character to guide the record’s inner quest. The immortal Ophelia also makes an appearance. “When I was in high school I read this book, a psychological case study called Reviving Ophelia,” Marina recalls. “That was my first introduction to the concept of Ophelia, to the symbolicism besides her actual character. It was touching, it really hit me: it was basically talking to all these young women in pre-puberty who felt in touch with themselves, felt powerful. Then these lost years happen, between 13 and 18: you grow up and you’re confronted with what womanhood means culturally. And all of that power is usurped, we all know what that feels like.” Few characters are as steadily enduring as Ophelia, and contemporary music seems way more intrigued by her own personal tragedy than the colossus that is Hamlet. “It’s still present,” Marina enthuses. “In the song ‘Ophelia’ I talk a lot about patriarchy in general, as a force that obviously has gotten in the way of my own deeper awareness and understanding of myself. Especially in the field of making art, there’s such an emphasis on ideas and concept; and if you’re a heart-centered person, that’s somehow not as interesting. Ophelia feels like a character that is lost in all of us, you have to reawaken her yourself.”

The natural world seems to be another inspiring fixture in Candlepower. It is vital to Marina’s creative process, as she ponders: “how I go about writing music is to feel open and channeled to another place or realm, or whatever you want to call it. I know how that sounds: if I were to hear that, I feel like it would sound a little alienating. It gives off the impression that there’s some kind of psychedelic experience. And I don’t really mean it like that. In writing, I need to be really grounded. Going into nature for me is a quick way to connect with another place, or a different kind of space. At its best, it is a spiritual experience – that’s what I’m seeking: when I feel closer to that, it’s easier for me to open up and listen better.”

And spiritual is certainly a word that fits Candlepower’s mood well. Unsurprisingly, one of the album’s deeper influences was the much-more-than-usual reading we all got to do during quarantine: in Marina’s case, it was Marion Woodman’s work, Jungian dream analysis, and spiritual books. “My relationship with faith and a God of my understanding is ever evolving and a source of deep inspiration and contemplation,” she says. “I’m always a little nervous talking about it because, again, I know what it sounds like. Faith, when you think that it’s no longer there, that you’ve turned your back on it… it pulls me back in. So that’s a deep way for me to also feel more connected and inspired by random things that pop up in my life: the drive-through at Starbucks, or a million things that I feel like I wouldn’t be open to if I wasn’t staying close to myself in that way.” Anything can be an inspiration, she emphasises, “If it moves you in any way, then that is content. I’m a purist, I feel very sensitive. I see something – even just trash on the streets – something catches my eye and I log it into my subconscious somewhere. Then I stir it around for a while and spit it back out in a different way.” 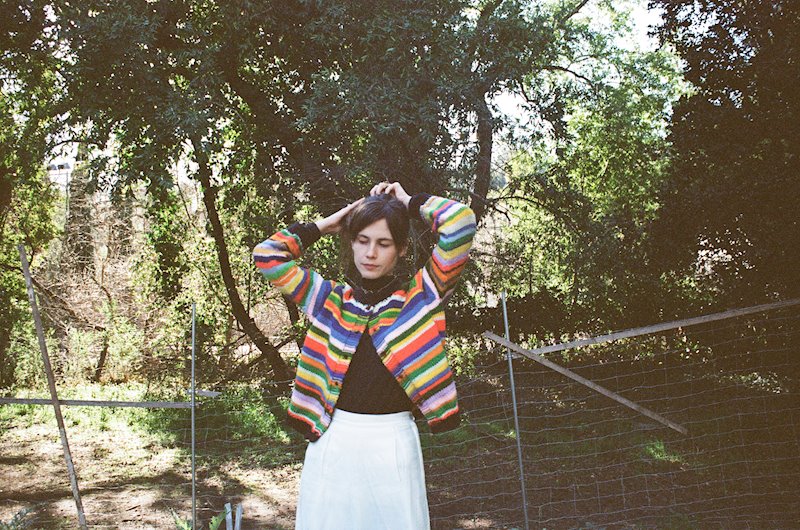 Marina’s considerations on the spiritual reveal an awareness that’s truly refreshing. ‘Believer’, one of Candlepower’s highlights, explains it in a way that’s both hermetic and compelling: “I’m not trying to recreate the wheel you see/ I just wanna hitch your wagon onto me/ That’s the difference between magic and mystery/ Somewhere between a vocation and making kitcheree/ Somewhere between LA and Joshua Tree/ I’m in a cafe buying tinctures off Etsy,” she sings on the album’s centrepiece. “That line in the song is about the commodification of spirituality, the commodification of something that’s ultimately really intimate,” she points out. “There’s pros and cons for everything. I find myself closer to the word mystery than magic, but the appeal of astrology apps and $30 spritzy things – not to put that down, because I think the person who made them probably does have a closer connection than we can see – the distribution of it in a mass way, the problems of that become hard for me. The illusion is what’s so captivating, but that’s where I get stuck in it: you can’t talk about those deeper, more complex thoughts mainstream. It’s a tough conversation. And I wanted to also make it clear that I’m in it too. I get confused. That’s just part of living in the world, I think, and being a part of culture is you have all these impressions and trends that you pick up and they start mirroring your internal world. But I believe that there’s a need to protect a deeper understanding, and I get nervous when I feel like it gets lost in just Instagram or Etsy.”

Candlepower is out now on Fire Records

One thought on “Marina Allen’s ‘Candlepower’: A Deep Understanding”