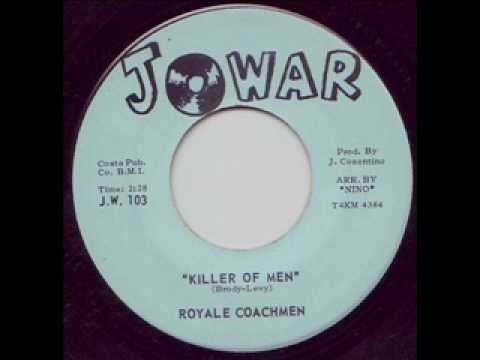 The Royale Coachmen (who have no idea where the extraneous “e” came from) formed at George J. Ryan Junior High School  in  Fresh Meadows, Queens, NY in late 1964. As regular shoppers in the record department at May’s Department Store on Queens Boulevard, they befriended the manager, Joe Cosentino, who decided to manage the boys, get them some cool stage wear, record them, and take them to London for the big time. Three out of four ain’t bad — the parents refused to let the guys go anywhere outside of their neighborhood, so aside from some backyard blasts, a prom, a Catholic girls school dance, and a single play on WMCA, The Royale Coachmen went exactly nowhere. Joe recorded their passive-aggressive opus in Manhattan at RCA Studios and issued the results on his JOWAR label (a sort-of portmanteau of “Joe” and his biz partner “Wayne Ray”). Jowar issued equally obscure sides on The Time Takers and Missing Links in ’66, and two on The Naturals in ’67. Two more singles followed and failed that year on the new Jowar side-label S.I.G.N., including ‘We’ve Got A Good Thing Going’ by Chuck & Eddie, which would go on to gain props as a northern soul staple.