Monterey, The Isle Of Wight… and Dereham! 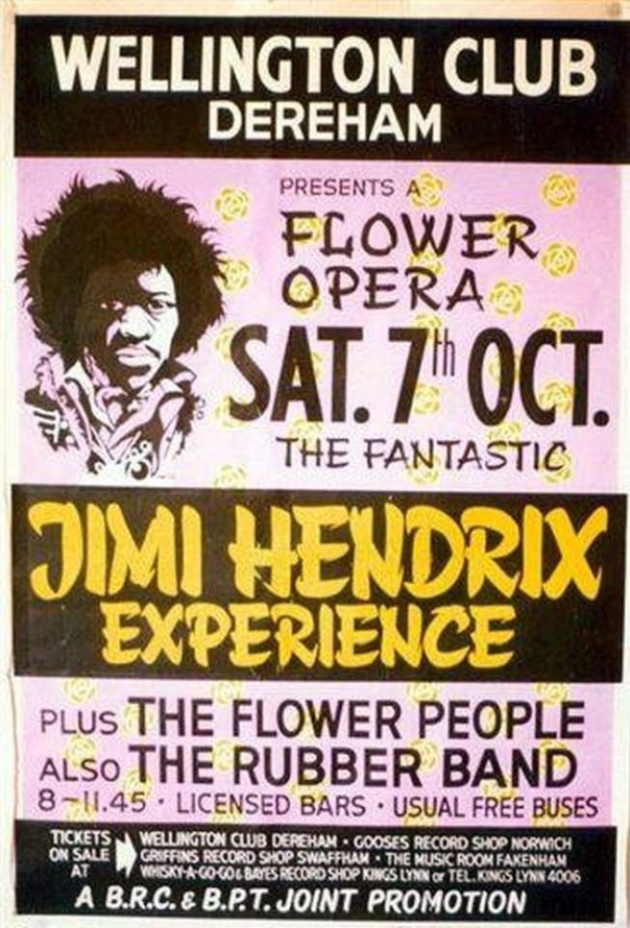 Supergroup Cream playing a pokey village hall usually reserved for jumble sales and scout groups, fuzzy garage-rockers The Electric Prunes headlining in a ramshackle seaside pavilion: one of the most defining aspects of the ’60s was the ability of nondescript, provincial towns to attract big names to their venues.

Dereham, a small market town in the middle of Norfolk, is the perfect example. Bands like The Small Faces, The Move and The Action all played The Tavern Club at the height of their fame. Syd Barrett’s Pink Floyd even passed through with their acid-propelled freak-outs and psychedelic light show, passing way over most people’s heads in a county that proved stubbornly resistant to the dubious charms of eastern mysticism and flower-power. But Jimi Hendrix is the one that sticks in the minds of mid-Norfolk baby boomers. Dereham-born Nick Sands witnessed Hendrix’s crunching guitar pyrotechnics back in October 1967 as a 17-year-old, and recalls that promoter Brian Cross pulled off the coup of the decade by booking the Experience to play at a time when they were pretty much the hottest band on the planet.

The gig was originally pencilled in for January, but when Jimi’s brooding, slowed-down version of US garage band staple ‘Hey Joe’ shot up the charts, he was bundled into the studio to quickly record a follow-up. He agreed to play later for the same fee, and by the time the band returned to this tiny town with a population of fewer than 10,000 in October, they’d already played The Monterey Pop Festival and toured America.

From the picture Nick paints of Dereham in the ’60s, it’s amazing anyone ever played there at all. He remembers Melody Maker running a feature on the 10 worst places to gig in the country, polling the biggest bands of the day for their thoughts. Dereham came fifth – one place higher than The Gorbals, a bleak, post-industrial area of Glasgow, which was widely regarded as the worst place to live in the country.

This was a place where bottles once rained down on Rod Stewart and battered Jeff Beck’s guitar to the point of no return. Geno Washington once played part of a frenzied set to an empty venue because of the townsfolk’s peculiar tradition of leaving the venue for a late-night conga around the market place. By all accounts, it was a weird place to perform.

But Jimi was different, and The Tavern, by now rechristened The Wellington Club, was so crammed with bodies that impromptu al fresco congas were a physical impossibility. Undeterred by the promoter’s canny price hike, hundreds of wide-eyed and sweaty teenagers witnessed a set that ran through most of the Are You Experienced? album, with ‘Foxy Lady’, ‘Purple Haze’ and ‘Hey Joe’ soundtracking the bizarre spectacle of a couple of bouncers chucking pints of water onto the crowd in a bid to cool things down.

The defining moment that cemented the gig in Dereham folklore was a typically theatrical pelvic thrust that planted the head of Hendrix’s Stratocaster through the false ceiling, taking out a few spotlights in the process. The 24-year-old star was firmly cut down to size when he had the costs of repairs deducted from his wages later that night.

This wasn’t Hendrix’s first visit to Norfolk – he’d earlier pocketed £39 for playing Norwich’s notorious Orford Cellar, a place where the emphasis was on more on raucous, sweaty R&B rather than personal space and fire escapes. But The Wellington Club was the one that stuck, and with plans afoot to commemorate the gig later in the year; the story looks set to live on for a long time yet.

One thought on “Jimi Hendrix in… Norfolk”