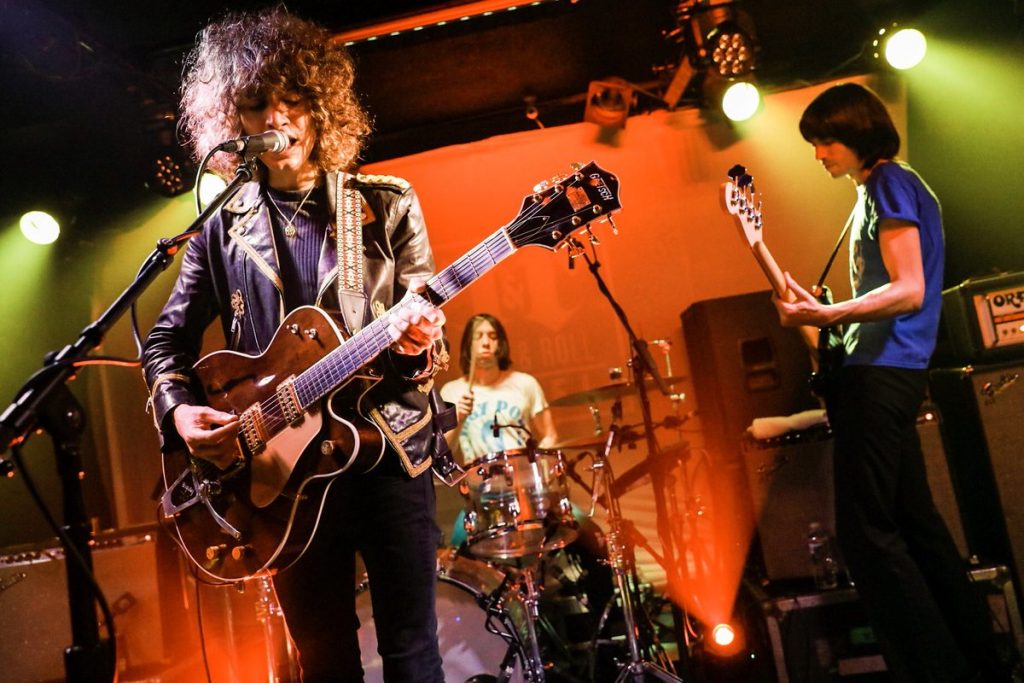 Listen to the full 45 min interview below

“It’s been about a year in the making.

“We have recorded it ourselves again, but have moved up in the world. This one wasn’t recorded in the tiny box room at my parent’s house. I’ve converted a couple of the upstairs rooms into my studio. It’s a lot more extensive now. I am in the process of building a studio in the back garden, in what used to be the old dairy hundreds of years ago, but at the moment upstairs works fine. Like on the first album I’m making the most of what space there is in a house, like Les Paul & Mary Ford or Joe Meek would… it’s just I have more of it now…

“Yes, we have fully produced the album ourselves again. I wouldn’t rule out working with anyone, but nobody within ‘indie means’ has appealed to me. The people who I regard as very, very good we just wouldn’t be able to afford to pay them to do it. Also when you produce a record yourselves you get exactly what you want. It can be a struggle, but when it works out and pays off it’s well worth it. An achievement. No one else can run a marathon for you.”

“Within reason you can take as long as you want, but we have had a bit of a rush over the last month. It’s great that we have been left to get on with what we do. Heavenly really get it and they give you the time and the breathing space, but sometimes you panic and think ‘Do they want us to make this record? Do they know we’re making this record?’ They do, but they stand back and let us do what we have to do. Then suddenly you get the due date out of the blue. ‘The album needs to be delivered by such and such.’ And then it’s… ‘Ahhhhh.’ That pushes you on. The good thing is we have just been ironing things out and you need closure. Otherwise we could easily overdo things.

“‘Certainty’ started off as a melodic exploration. The sounds I got up in the studio were very instinctively made. The synth bass on the beginning was used as I couldn’t be bothered to go and get my bass out of the case. So it stuck. Once I’d shown everybody they liked it, but you never know what your band mates or the general public will think of an idea that’s a bit different. That bass line was meant to be a bassline, but it ended up staying a synth line. The sound had a certain quality to it as it sounds like an analogue Moog fuzz bass. I was channeling a bit of Air into the song too. ‘Sexy Boy’ has the same kind of fuzzy feel. Air, on the earlier records, were certainly pioneers of just understanding sound in a really creative way.”

“There’s been a lot of writing from Adam on this record too – everyone’s really written for this record, well the three of us, Tom, Adam and myself ­ – and there’s a song that Adam’s written called ‘How Would You Like To Go’ and it’s incredibly unique. There’s nothing really quite like it.

“It’s a full steam ahead record. We’ve gone all out with the production and trying to create the songs within the environment of an album, so it sounds continuous. We have Side One and Side Two programmed: two intros, and two outros. 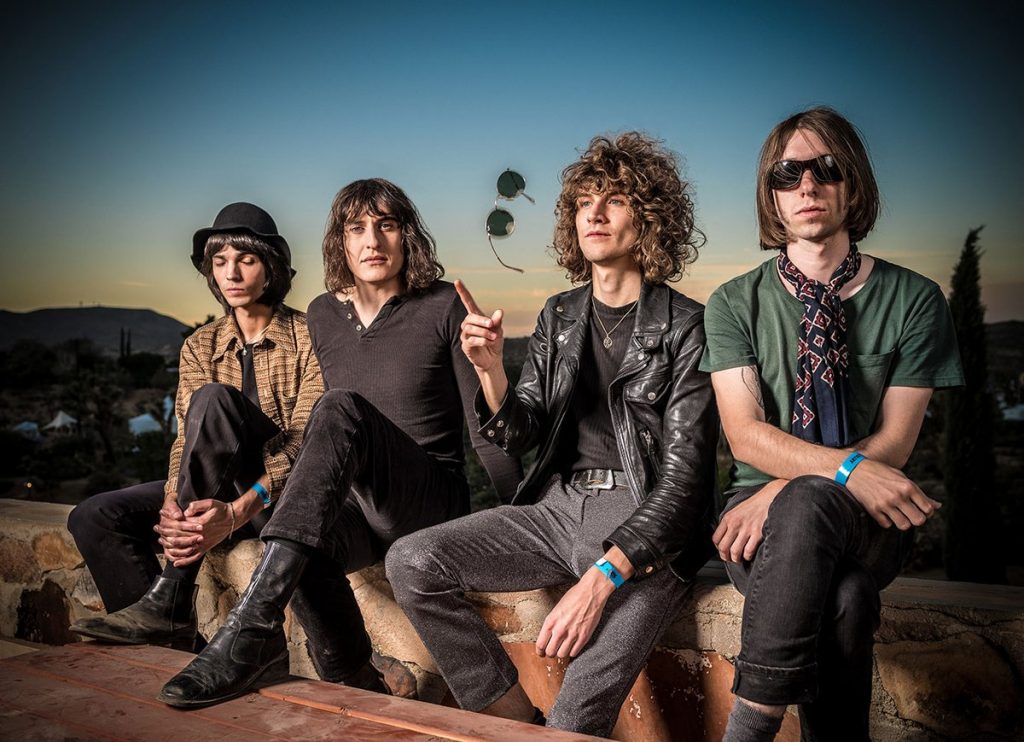 “On the first album I buried the vocals more, because I wasn’t as confident as a singer. It’s amazing how much you improve from touring. A lot of the songs on this record had three or four vocal takes, with the exception of a few songs where I wrote in a key that was bit too high, but I liked. So I probably did 20 takes, just because I don’t want to drop the key for the sake of it. I like to push myself and always know it’s doable. I’ve taken that from the live environment.

“When recording I use a mix of everything. From the first record there’s a lot more stuff in the studio now: guitars, amps, out boards. A big thing that changed on this record was the mic that I was using. On the first I purely used rhythm mics because any condenser mics I had used were horribly harsh and sounded like a T’Pau record, and on this new record I have been using a Telefunken U47 Valve Condenser. It’s been a huge part of the sound. Every vocal was recorded using this beauty. The amount of records that have been made using this is incredible. I just plugged it and could see why. I was a bit against the snobbery that goes with gear. There are no rules. But this microphone I have never known anything you can gain up so high and get no noise. It’s like silent. It captures charisma in your vocal. With a rhythm mic you end up adding stuff back in as you are losing the top end. I still to this day adore rhythm mics as I feel it makes you approach the singing in a softer way, but the U47 has been a huge part of the album.

“Well ‘Oh The Saviour’ (originally called ‘Volcano’, which is now the album title) was the first track we recorded vocals with this mic and the approach in the verses is very dry; there’s very little reverb, if any. It just sounded so good by itself. Anything else was like taking the focus of the vocals. 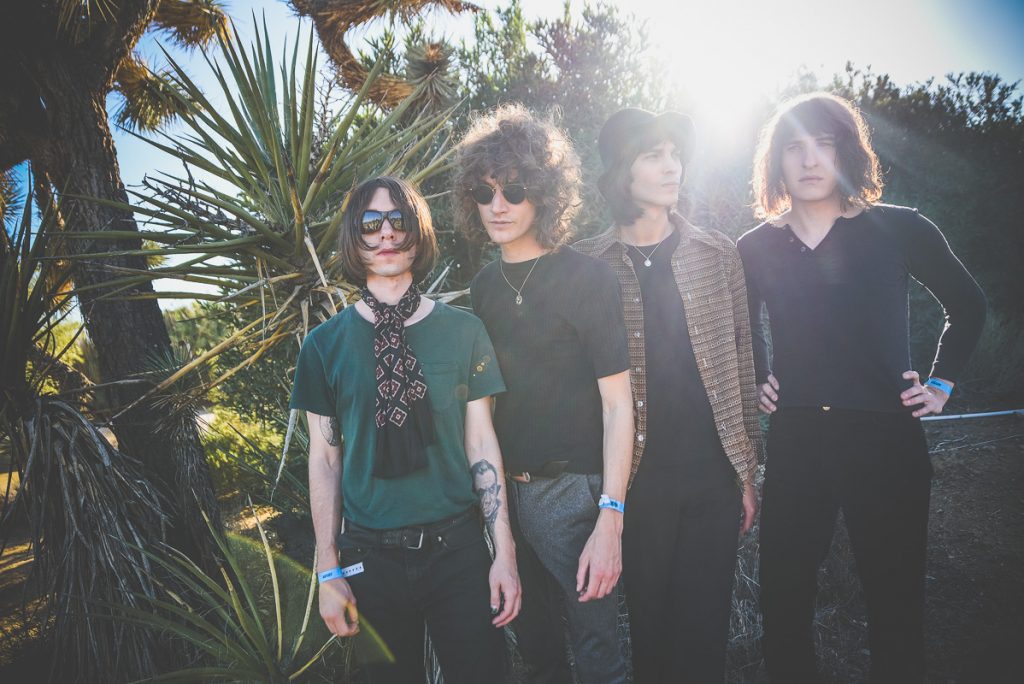 “Gear wise we used: an MS20 synth, a 1952 Selmer Clavioline , WEM copycat, Space Echo (the real deal, not software), some ’70s DBX compressors, I have a prototype of the Ted Fletcher stereo compressor  EQ(he built the range of Joe Meek things). I use a front end of an old ’60s valve reel to reel which I use for DI’ing things. I’ve distorted a lot of things using that as it has a beautiful harmonic valve distortion. It’s ridiculous the amount of gear I now have. The Gretsch is still king, but I have been using a lot of things. On ‘Born Into The Sunset’ I use a 1966 Gibson Firebird non-reverse 12-string, which I bought when I was in Portland, Oregon. It’s an amazing guitar. I was touring it for a bit but stopped as there are only about 300 in the world. They were made for one year. Over the years of touring I bought quite a few bits. I got a Chandler tube driver and a ’67 Coronado 12 string in the Antigua finish.

“I still use plug ins too as there’s no way I could afford some of the things I want. There’s a difference, but it’s slim. With the analogue thing when you go directly into your computer once you get a good audio interface you really notice what all your gear is doing.

“The new album is Temples but Temples rediscovering things. You can listen to both records and it’ll work. We haven’t got lazy with it though and just made a follow-up. It should be an interesting record. We wanted to create songs that were interesting but at the same time are doused in pop sensibilities.

“We listen to music a lot in the van on tour. Things that stick out to me are Iggy Pop, there’s always a lot of Bowie, Eno as well… some Nick Nicely… some classical stuff… some Gusta Holtz. It’s an individual thing. I’d definitely say I consume the least music out of everybody. Thomas is the vinyl junkie. He really is. He’s constantly searching. I’m not. If I’m writing songs I don’t listen to music: that’s just how I work. I end up inadvertently ripping something off and I don’t wanna do that! Music fasting.”

“The art is currently being designed by Jonathan Zawada who did the great cover for ‘Certainty’.”

Volcano will be released on Heavenly Recordings, March 3rd 2017