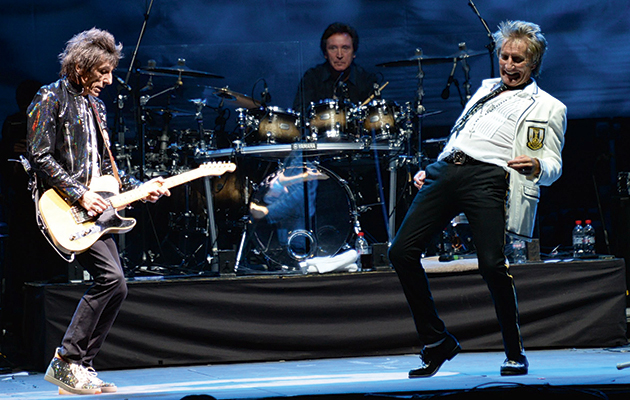 They’ve had their knockers. And it would be all too easy to poke fun at this day. Certainly, finding oneself wandering the fields of a Polo club surrounded by an assortment of Clarksons, Partridges, Patsies, Edinas, Fred Perry-adorned Phil Mitchells and people you largely suspect of possessing somewhat anathematic opinions makes for an experience bordering on the surreal. Likewise, the numerous mingling Rod-a-likes, lending the uncanny air of attending some diabolical theme park (“Jurassic”, of course), one of whom is glimpsed taking a call on his mobile phone through the mesh partitioning the VIP enclosure from we mere mortals, his barnet, tangerine complexion, tasteless attire and general demeanour momentarily convincing, but later sighted sans-mirrored sunglasses with a look of shame written on his mug akin to that of being caught in flagrante in the midst of inopportune climatic conditions.

Meanwhile, Chris Jagger is on stage, all purple lamé and Stringfellow mullet; Mollie Marriott sings her old dad’s ‘Aftergow (Of Your Love)’, having inherited his chin, if not quite his pipes; the house band for the occasion are led by Jim Cregan of Blossom Toes fame, brow perpetually furrowed as he studiously regards the music stand before him, clearly enjoying himself more than at any other time since his Katie Melua heyday as he takes his celebrated lead on Steve Harley’s ‘Come Up And See Me (Make Me Smile)’; Paul Carrack sashays across the length of the stage to a large table upon which an exceedingly refreshed Annie Nightingale is setting up decks, where he mimes a “scratching” motion and is rewarded with the kind of steely glare that got King Polydectes permanently stoned. This Havershamesque apparition’s choice selection of MP3s burned to compact disc includes gun-jumping “spins” of ‘Cindy Incidentally’, ‘Had Me A Real Good Time’ plus ‘Rocks’ by Primal Scream, the latter rendered even less enjoyable than usual by devastating infrasonic frequencies which, judging by the news to the nose, may have had a distinctly “brown” resonance with some audience members. “ROD LOVES THIS!” she exclaims. Perhaps Rod has a scat fetish? Either that, or sturdy bowels for a man of his vintage.

Before anyone can come to terms with what has happened, she slurs something about how rock ‘n’ roll history is about to be made, and would we please welcome: THE FACES! (GASP!) The lads themselves! Good boys… when they’re asleep. Unfortunately, two of them are now exactly that, and the reality of what we effectively have here is megastar Rod Stewart (and his own slick-dick sessionistas) joined by special guests Ronnie Wood of The Rolling Stones and Kenney Jones of The Who. Absent friends Plonk and Mac were, for this writer, very much the heart and soul of these boys, and the comparatively recent passing of the latter is a painful reminder of the fact that, now, There is but One Small Face.

So you see, it would be oh-so easy to take the mickey out of all of this – perhaps even… uncharitable, under the circumstances – but, hey! Who breaks a butterfly on a wheel, to coin a phrase? When messrs Wood, Stewart and Jones take the stage, something genuinely magical begins to unfold, albeit very gradually. They strike up a ramshackle ‘I Feel So Good’, by their own admission a conscious “warm-up” vehicle which chugs along unspectacularly yet is carried by a wave of palpable goodwill. Finding their feet, they slip into something more comfortable in the form of  1974 swansong ‘You Can Make Me Dance, Sing Or Anything (Even Take the Dog For A Walk, Mend A Fuse, Fold Away The Ironing Board Or Any Other Domestic Shortcomings)’, which Woody announces as his favourite Faces song. Whilst his opinion is difficult to concur with, the number actually works well in this rather smooth setting, with the horn section and blonde backing singers in tight sequinned dresses justifying their ominous presence.

A spirited ‘Ooh La La’ dedicated to its late lamented author ignites the evening’s first outbreak of football terrace-style chanting amongst the crowd, a phenomenon for which our heroes are, of course, renowned. Rod himself is evidently emotional also, taking the lead on a song he really should have sung all those years ago, had he not been such a diva about it being in the wrong key for him. Regrets? I expect we’ve all had a few…

‘I Would Rather Go Blind’ finds Rod in fine voice, simpatico with Woody’s lyrical lead guitar, but despite the charm of the significance of the occasion, precious little of what has been performed thus far has much of the true spirit of old. Until, that is, they drop the ‘I Know I’m Losing You’ bomb, and everything falls into place as the inestimable Mr Jones comes into his own, his sensational swing and no-nonsense solo pickled in time since ’71. All of a sudden, it becomes apparent that these geezers really have Still Got It.

They maintain this momentum on ‘Stay With Me’, dragging its heels a touch to begin with but soon yielding to that beloved shuffle which compels all present to sway and sing along with as loudly as their lungs will allow. There is scarcely an instant throughout this concert where the presence and playing of Mac is not sorely missed, and it has taken four feet to step into his tiny corduroy shoes – those of Josh Philips on organ and Sam Tanner on electric piano, the latter of whom pays admirable homage to our fallen comrade here. On the other hand, Conrad Korsch on bass (who, in common with second guitarist Robin Le Mesurier is a veteran of Rod’s many solo crews) is perhaps a tad flash, but who’s counting?

By now everyone (the band included) is far too busy grinning from ear to ear to pay much heed to how much of a mess a concluding ‘Sweet Little Rock’n’Roller is, but then again it always was. Rod apologises for them having rehearsed only seven songs, but promises many more when they tour before long. Regardless of whether or not this transpires (and in spite of all the sniggers), what happened at Hurtwood Park tonight was actually something very special, transcending its environment and component parts: namely the unique chemistry, camaraderie and – yes – love between Stewart and Wood (the duo have everyone in stitches as the former perpetually teases the latter’s abstinence from the very catalyst for which the band are most famed), underpinned by Jones’s untouchable drive and feel, which above all else truly defines the sound of this music, more so now than ever.

They really don’t make them like this anymore. Too Bad.