It’s once a year or less, that I (JON ‘MOJO’ MILLS, Editor-In-Chief) get really excited about a new band. We get so much stuff sent to us, and to be honest most of it goes in one ear and out the other, however good. Jacco Gardner… White Denim… Jonathan Wilson… Temples… Father John Misty… and Foxygen (more on them in a minute) have been bands I personally have championed… and now comes the incredibly intricate music of two teenage New York brothers THE LEMON TWIGS… who were discovered by Foxygen’s Jonathan Rado. We’ll feature the band properly very soon, but for now here’s their own biog and new video. Enjoy! I hope you love them as much as me. Talent this immense is rarely seen and heard 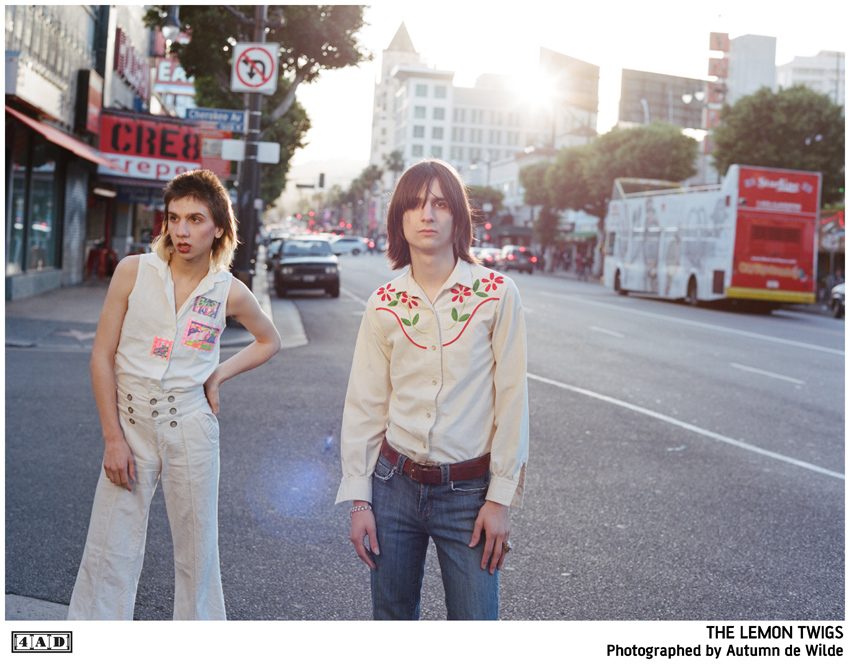 Once or twice every generation, Long Island introduces the world to artists of such singular originality that they change the very nature of their art: Lou Reed; Jim Brown; Robert Mapplethorpe; Andy Kaufman. With their debut album for 4AD, Do Hollywood, The Lemon Twigs have earned themselves a spot on that list.

Fusing tightly constructed pop, sophisticated orchestration, and British invasion melodies into a 10–song masterpiece, the D’Addario brothers—Brian (19) and Michael (17)—are whipping fans and critics alike into an utter frenzy.

Born into a musical family, Brian and Michael grew up on The Beach Boys and The Beatles, whose albums and films played constantly in their house. As toddlers, they were already harmonising on ‘I Want To Hold Your Hand’, and soon they were playing drums and mastering whatever instruments they could get their hands on. Ask about their childhood dreams and they’ll tell you that they never aspired to do anything but make music together. It shows.

“Brian and Michael are two of the best musicians I’ve ever met,” says Foxygen’s Jonathan Rado, who discovered the duo via Twitter and produced the new album. “As teenagers, they work like studio vets. Brian can play anything you hand him – he played all the strings and horns on the record – and Michael is the most captivating drummer I’ve ever seen. There’s nothing they can’t do.”

Rado proved to be the perfect foil for the wunderkinds, and the resulting album brings together everything from Brian Wilson and David Bowie to Queen and The Association. Their music can soar like a carnival calliope and then swiftly drop down to its knees in the hushed tones of a confessional booth. Their vocals move seamlessly from a cabaret croon to classic la–la–la harmonies. They mine inspiration seemingly from every era of rock, stitching it all together into a baroque–pop quilt of many colours.

It’s an ambitious approach, to say the least, but the album lives up to the hype. They forthcoming album Do Hollywood opens, appropriately enough, with ‘I Wanna Prove To You’, which parades out of the gate like a circus arriving into to town. “I wanna prove to you what I can do,” Brian sings as he and his brother proceed to do just that. Bouncing piano and dense harmonies give way to shifting time signatures and mind–bending arrangements.It’s the perfect introduction to The Lemon Twigs, and to Do Hollywood, which features the brothers alternating writing credits on each track and liberally swapping instruments, just as they do in their electrifying live performances (they tour with live members Megan Zeankowski on bass and Danny Ayala on keyboards).

Lead single ‘These Words’ builds from a delicate whisper to a rock and roll roar, while ‘How Lucky Am I?’ tugs at the heartstrings, and ‘As Long As We’re Together’ calls to mind the memorable melodies of Big Star and T–Rex. Perhaps no song demonstrates their brotherly democracy better than ‘Hi+Lo’, the track unfolding in movements like something off of Abbey Road’s Side B medley with Michael singing and playing guitar, drums, and bass, and Brian adding horns and strings to flesh out the orchestral atmosphere.

“We were crafting these songs pretty intricately,” Brian says. “There’s a lot of care in the arrangements. They’re built to get at people who like nice pop songs. But they’re not empty. We put a lot of ourselves into it and the album has a lot of substance.” It was that substance that caught the attention of the iconic 4AD label and has already earned the banddates with other critical darlings like Foxygen and Car Seat Headrest. With high profile tours and their label debut on the horizon, it’s only a matter of time until the rest of the world discovers Long Island’s next great cultural contribution. Get ready to Do Hollywood. It’s time to meet The Lemon Twigs.

Together with friends Megan Zeankowski (bass) and Danny Ayala (keyboards), Brian and Michael will take The Lemon Twigs on the road, and they will play Shindig!‘s hometown London in a few weeks! We’ll be there.

Do Hollywoood is released on 4AD on October 14th