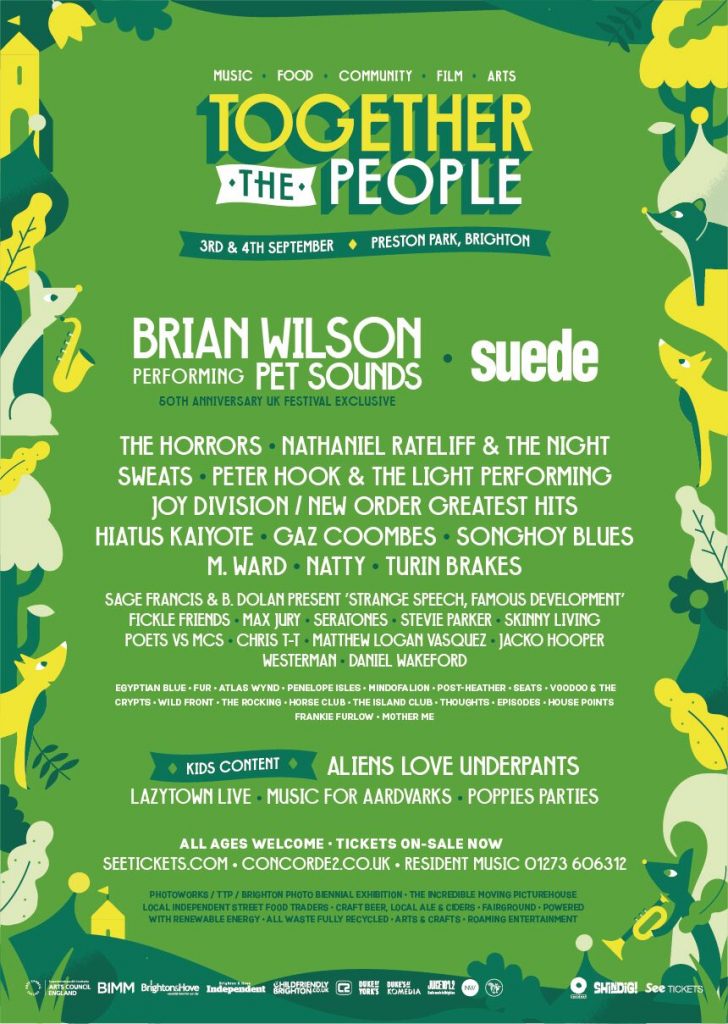 Brighton’s new family festival, Together The People, have announced a 2nd wave of acts for the event’s second year, which takes place this September 3rd & 4th at Preston Park in Brighton.

Suede have now been confirmed to headline the Sunday night (September 4th), joining a stellar line up which already includes a UK festival exclusive of Brian Wilson performing Pet Sounds in it’s entirety for the record’s 50th anniversary & re-release. Brian Wilson is wooing festivals across Europe as we speak, and will bring the show to Together The People 2016 as Saturday night’s headliner on September 3rd.

Day tickets are now available for both Saturday & Sunday and are selling fast – details below.

The full line up is now (new additions in bold):

Together The People is open to all ages and will host three music stages and welcome back the Incredible Moving Picturehouse Cinema. 2016 will also see the return of the Soapbox stage hosting a selection of talks, debates, poetry, spoken word, photography exhibitions and acoustic performances from local contributors and beyond.

An exhibition of new photography by University of Brighton students commissioned by Photoworks and Together The People that will show at TTP and during October at Brighton Photo Biennial 2016 (BPB16) as well as several of the city’s libraries over the summer. The two Brighton festivals are teaming up for the first time and Photoworks will also be running family-friendly photography workshops at the Photoworks Photography Tent at Together The People. This project has been supported using public funding by the National Lottery through Arts Council England.

Together The People is an independent, greenfield, non camping, music and arts festival taking place in Preston Park, Brighton on Saturday 3rd and Sunday 4th September 2016. The primary focus is to celebrate music, food, community, film and arts within the city of Brighton by delivering a high quality, creative, family friendly and socially aware event. In 2015 the festival was powered by bio-diesel & solar technology, re-cycled over 5.3 tonnes of waste and generated over £2,000 in public donations for local homeless charity ‘Brighton Housing Trust’.

Day tickets are now available for both days and tickets can be purchased via the following outlets: